When your cross training gets dangerous - my bike accident

A car came around the hairpin turn and in a sickening moment I tapped my brakes but my bike didn’t respond by slowing. I was going nearly 40mph down the pass, you can’t see it in the second photo posted (map) but there are these fun  curves as you’re descending, I was leaning into the turns, pumping the bike on the straights, no braking needed, just pure speed. As I approached the sharpest turn, one I had to take really wide, I'd made this turn more than a dozen times in the past, always slowing enough to make it in time but I suddenly wondered if I was going too fast. I panicked. 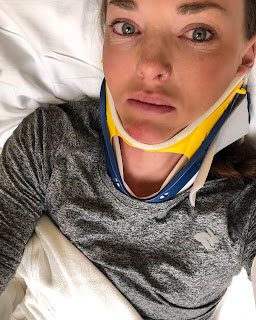 Hitting the brakes didn’t bring about my desired result of slowing. Instead of slowing, the wheels shot left and I don’t remember much after that except I knew I was going down. The next thing I remember was a woman trying to talk to me and I didn’t know where I was or what had happened. I couldn’t talk. I was trying to figure out what was around my neck and head, it was headphones and sunglasses. 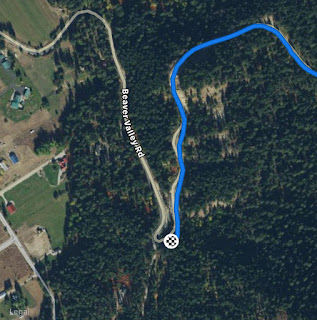 My helmet was snapped in two places, all the way through the hard foam and it looked like someone had hit the right side repeatedly with a hammer. I couldn’t figure out what had happened. I keep thinking I needed to ride my bike. I had only been 4 miles into a 30 mile ride when I hit the pass. A woman was trying to talk to me and I can’t remember but I think she had pulled me to the side of the road. Ir maybe I crawled. I had flashing colorful lines in my vision, like a TV screen. As I sat there cradling my head it slowly felt like my brain was coming back.

I remembered riding down the pass and an overwhelming feeling in that moment that I had not completed my ride, not even close and I was not pleased. I don’t remember what I said to the woman for the next couple minutes, but she had called 911. A man was directing traffic and the next thing I knew the EMTs were there. I didn’t want to go to the hospital. For a moment I thought maybe I could ride home, but my bike was not in a condition to ride, although it didn’t appear to be totaled. None of this I realized at the time. 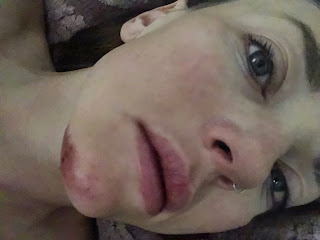 The EMTs convinced me to go to the hospital. Something about spinal cord injuries and xrays. Now, the next morning I feel worse, my head a bowling ball of throbbing and my right arm is injured, I can’t lift it. Something is wrong in my shoulder. I’m in my own bed but my scrapes feel raw, I need to cover them as every time I move slightly a I feel the rawness. I’m missing large patches of skin. 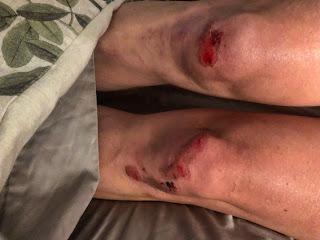 Despite the feeling that there’s a 20 pound weight on my head, exploding, I realize I’m very, very lucky. A 40 mph crash on a bike and I am walking away with no broken bones, time will hopefully heal my head and shoulder, but I have a head and its in one piece. This would not be the story had I been riding without a helmet or had I hit the car or fallen differently. I’m guessing I did a rolling movement after going over my handle bars. I had clip in shoes but when I came to
after the crash, my bike was far from my side. My right side took the majority of the impact, judging from my scrapes and pain and helmet damage.