What better way to explore the Hawaiian Island of Oahu than by running on many of its trails and beaches?
My trip to the warm sunny island of Oahu began with a week on the North Shore and ended with a week in the bustling beach town of Honolulu to run one of th toughest 100 milers in the country, the H.U.R.T. 100 mile Endurance Run.  H.U.R.T. is an apt name for the race, as it is tough and painful even in terms of trail running races: almost 25,000 feet of climbing on one of the most technical courses in the United States.  The course boasts slippery rocks, mud, and long stretches of roots that make a lattice work of the trail and almost guarantee that you will eventually fall.

THE NORTH SHORE
A week on the North Shore just outside of the town of La'ie was the perfect location to relax before my big race.  I ran a few times on the beach out of Malaekahana State park (a great 4 mile run).  The North Shore is home to the famous surfing culture of Hawaii and most famously the town of Haleiwa, where you can find the best surfers in the world enjoying the big waves.  The waves on the North Shore are exciting!  I made sure to find time between trail running to play in the surf.  Since I am a bit better on the trail than in the water, I mostly body surfed.  If you time the waves just right, the wave will carry you right into the shore.
Many of my favorite trail runs are on the North Shore.  Right outside of the small town of La'ie is the La'ie Trail.  The La'ie trail is 6 miles out (12 total) if you run to the summit, or 3.5 miles to the waterfall (7 miles total).  I ran to the waterfall, the last 1/2 mile of which was a slip and slide-rock climbing verticle adventure.  Like so many trails on Oahu, the La'ie trail is narrow, slippery and often covered in rocks, but more importantly magnificently scenic with ridge views of the ocean and the tropical hillsides.  Flowers and the scent of flowers are everywhere, as are the wild Strawberry guava trees.  If you know your fruit, you can eat quite a bit of your way up and down the trails. 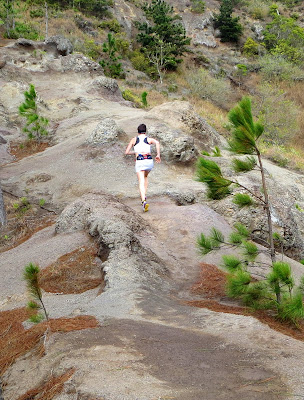 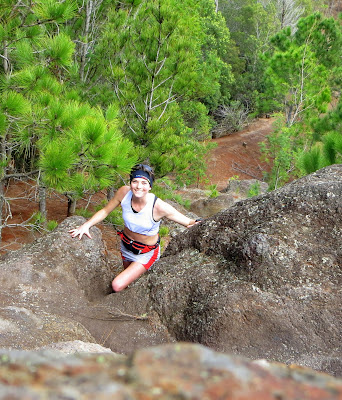 The best fruit was the passion fruit I found just north of Haleiwa on the Kealia Trail.  This is my favorite place to run on the North Shore because it is a pretty dry trail and there is lots of climbing!  The first 1.5 miles climbs 1,500 feet with a view of the ocean almost the entire climb.

WINWARD SIDE
Perhaps the most spectacular views on the island are from the Olomana Trail.  The Olomana trail is right outside of Kailua, on the Winward side of the island.  The "run" is really more of a scramble, as you use ropes and hand/foot holds scale many of the rocky parts of the trail after about 1 mile of running.  I only went as far as the first peak (2 miles out), but there are 3 peaks you can climb, all as crazy steep and narrow and shockingly beautiful as the next.  As the trail summits each peak, it becomes more narrow with rocky cliffs on both sides.  Not a good trail for the vertically challenged!


HONOLULU
Honolulu was the last city I explored on my trip.  The Ko'olau Mountain Range, between Honolulu (South Oahu) and Kailua (Winward side), boasts most of the trails near Honolulu.  The H.U.R.T. 100 course runs on the Ko'olau Range, just North of the city. During the day, I enjoyed views of the city, ocean, and forest as the course climbed along the ridges.  The race course was almost entirely uphill or downhill.  There was virtually no flat trail running.  I loved the bamboo forests and the music that came from the wind blowing the shoots into each other.  On a climb, reaching the bamboo meant you were almost at the top of the climb.  This translated to sweet relief from the intensity of climbing in a humid, warm climate.

H.U.R.T. 100 RACE
In the first 3 miles of the race, I sprained my ankle.  Visions of finishing the race began to vanish as the pain seared up my leg and made me roll on the ground in pain.  Yet.... I could not even comprehend quitting so early in the race, so I continued.  I turned that same ankle 2 more times on the second loop (the course is made up of five 20 mile "loops"), each time falling over and rolling on the ground in agony!  The first sprain had stretched the tendons/ligaments and the ankle was completely unstable. Thanks to a great taping job at Maikiki Aid Station by a talented volunteer and ibuprofen, I was able to finish the race and stay in the competition, finishing 3rd place woman and 15th overall in 28hrs and 35 mins.  My time was good enough for the 8th fastest woman's time ever on the course.  Very few runners even get under 30 hours and the finishing rate is has yet to be more than 44%!  What a beautiful and tough course!


For more information on Trail Running on Oahu, get the book: Hikers Guide to Oahu by Stuart M. Ball, Jr.

Also check out my blog posts documenting many of my runs on the island of Oahu:

And some more pictures from my trail running adventures on Oahu: