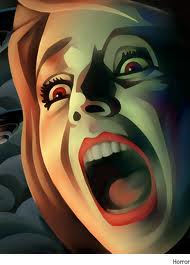 picture courtesy here
As an adventurist you know the feeling: something that should seem okay or might have a perfectly reasonable explanation gives you the heebie jeebies (HJ).  Then again, maybe the explanation isn't perfectly reasonable...  Or maybe you watched a few too many horror movies, or if you are like me you avoid them altogether but still have a healthy dose of heebie jeebies.  Note to readers: I want to boast that despite the occasional HJ's I was running at night, alone, on the trails for more than an hour recently and never got the HJ's.  So  there.  Still, it's worth noting that there are some things I've noticed about the HJ phenomenon in general:

Swimming in open water produces more heebie jeebie (HJ) than any other sport.  Add in dead trees sticking out of the water, a little wind and waves, all in a lake and you have the perfect HJ experience.

Running in the trails can also produce a healthy dose of HJ's.  Here are as few instances in which I got some HJ's...

Scenario #1: Abandoned Child
I found a note that someone had apparently lost in the trails, it read:
Pick up Joshua

Holy heebie jeebies!  Some mom lost her note and forgot to pick up little Joshua from who-knows-where.  Not to mention that she even needed to write a reminder in the first place.  He's probably still sitting there waiting to get picked up.... poor kid....

Scenario #2: Blond Ghosts
A strangely memorable instance of HJ's occurred recently when I was running on trails and as I was about to take the turn toward the Saratoga Woods I saw a woman with long blond hair walking, rather stiffly I must say, straight on a trail that leads to a dead end.  She didn't even notice me turning onto the trail behind her, but I thought it rather creepy that she kept walking on a trail that dead ended.  HJ!!!


Scenario #3: Disappearing Hikers
Then there was the time that James and I were running to the Goldmeyer Hot Springs last winter on a 10 mile run out to the springs and a 10 mile run back to our car.  We were sitting in our car enjoying a little food before our 20 mile run (we'd just done 12 miles on the wrong trail) when we saw two women with large overnight hiking back packs head down the trail toward the hot springs.  We started our run about 10 minutes, 20 minutes at the most, after we saw them.  They were walking and had quite a load on their backs, so I figured we'd catch up to them in the first few miles.  We never saw them.  And to top it off, there weren't any trails that went off of the main road that we saw.  Wooooooooo!

Scenario #4: Unexplained Abandoned Clothing
Okay, you've seen it before, the one hiking shoe 20 miles out on a seldom used trail (yup that's right, creepy!) or the underwear hanging from a branch by the lake.  Yeah, I forgot mine too.... Need I say more?

What are your HJ experiences?  Do tell!