As part of a whole weekend long birthday celebration James helped me plan a Saturday and Sunday run.  Who better to help plan a fun run than Mr. Race Director?  Saturday we went to Discovery park in Seattle with a few other runners and had a fun run through the trails to the beach.  We ran on the beach for a mile or so before we came to a dead end of sorts.  We doubled back and scrambled up a steep trail back to the park trails.  The trails are great for faster trail running and trail tempo runs as they are relatively wide and clear.
On Sunday James and I ran with a group of runners from Mt. Vernon and Anacortes, who are part of Skagit Running Club.  We ran most of the trails in the Deception Pass State Park starting at West Beach on Whidbey Island.

Below I posted pictures of both fun runs and a more in depth description of our run at Deception Pass. 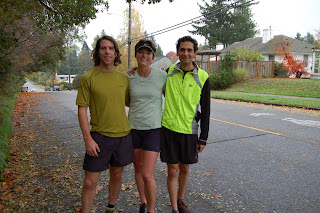 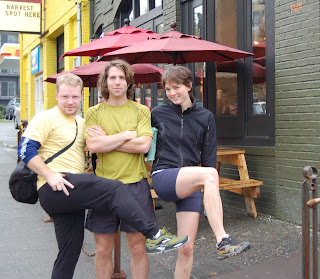 Eric, James, Candice: ready to run after breakfast at Citizen 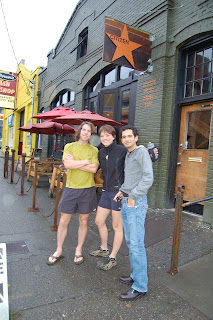 James is putting on a race at Deception Pass in December 2011.  To see the rest of James' races for 2011 visit Rainshadow Running.  On Sunday we ran the first 2/3 of the 50K course he designed for Deception Pass.  Although the last 5-6 miles was modified for our run and we finished the run with 2 miles fast on the road (in the dark).  To see a map of the park's trails click here.

We started our run at West Beach and quickly headed to North Beach.  From there we ran across the Deception Pass Bridge to Bowman Bay and Rosario Beach.  We then backtracked through the Bowman Bay trails and crossed the road doing a loop around Bowman Hill on the Fidalgo Island side of the bridge.  From Bowman Hill we crossed back over the bridge and under the bridge to Goose Rock and all the way up to the lookout at the top.  Sweet views!

The sun was beginning to drop in the sky and we had done about 14-15 miles.  We descended the lookout and made our way to Cornet Bay and Hoypus Hill as the sun was setting.  After about an hour in the trails at Hoypus, I had to pull out my headlamp. The trail was really dark by the time we made it back to the road.  We decided to run 2 miles back on the road rather than go through the trails, cutting a few miles off our run.  This turned out to be a good plan as the park ranger was waiting for us when we got back to our car!  Apparently the park closes at dusk and we could have been locked in.

A few of the Skagit Runners, Terry and Delores had us over for dinner after the run and surprised me with a birthday cake! Thanks everyone! 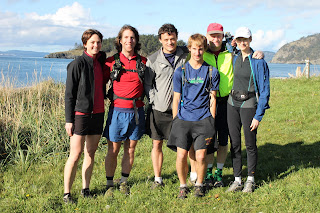 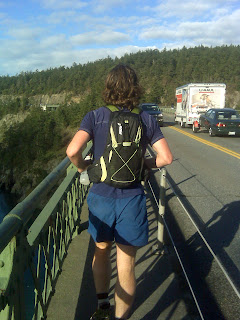 The course will go over Deception Pass twice. 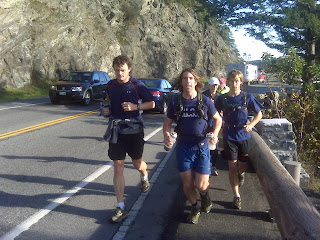 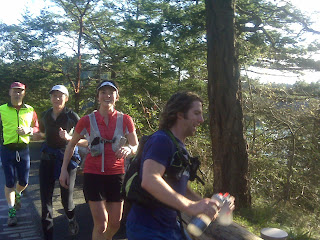 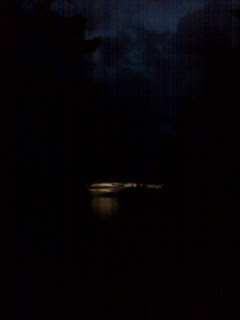 We ran the last 1 hour or so in the dark.  This is actually a picture of the incredible sunset.  It looks more like a ferry boat to me though.