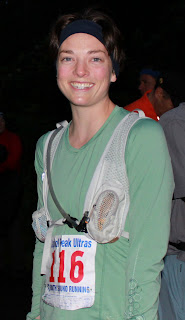 MY FIRST...
Capitol Peak was my first 50 mile race.  I am new to ultra running as of this year, and to try a 50 miler so soon, well, I must love it!  I figured that if I enjoy 50K why not 50 miles?  It only means I get to be on the trails longer doing what I love!  Although I knew it might be a little (not a lot, mind you!) crazy, I was willing to give it a go. I was lucky to have my friend and fellow Down Sound Racing partner, Challis, running with me. 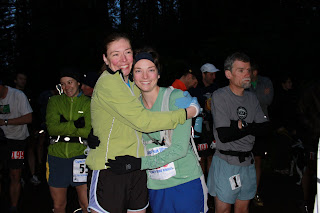 Challis keeps me warm at the start line
EARLY START
Race started at 6 AM, it was just getting light.

The scenery was incredible, with lots of open areas.  I like to break out of the trees every so often and see the views and this race had a lot of those breaks.  In the early miles there were a lot of clear cuts that we traversed and they had their own unique  beauty: small alders reaching for the sky amidst uprooted sculpture-like tree stumps.  Fog filled some of the empty hillsides and in the distance, trees grew for miles. (Click on "read more" for the full race report) 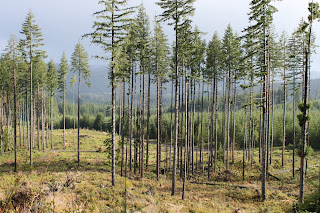 THICK, OOZING MUD
What I remember most about the early miles from the start to Aid Station 2 at 8.5 miles was MUD.  Slippery, wet, thick, everywhere!  Mud and puddles.  Lots of water in the trails.  I am used to running on muddy trails here on Whidbey Island, but this was a step up (or down?).  I was so glad I decided not to wear my barefooting Vibram Fivefinger shoes, as it would have been really slippery and even wetter than it already was.  Instead I wore my Nike Free (3.0), which is a minimalistic running shoe. 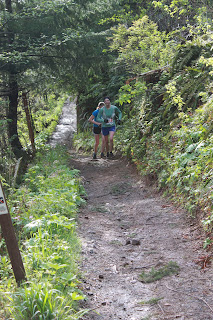 Candice and Challis going up the hill, one of many to Aid #3
After Aid Station 3 at 12.9 miles, there was no mud.  The trails dried out and the sun was shining!  Just the day before the rain was blasting down in Olympia, rivers of water flowing down the trails of Capitol Forest.  As I write today, the day after the race, the rain is coming down again! 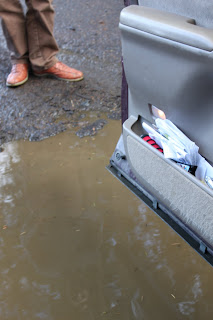 A big puddle of water next to our car.  The day before the race we drove around through the winding mountain roads to checkout the course. 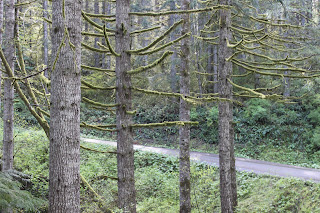 See?!? I wasn't kidding or whining, it rains a lot here!  Look at that moss on the trees! 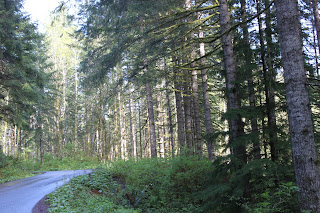 GRUNT TRAIL
After mile 12.9 the trails began to climb steeper and steeper until we reached grunt trail, the steepest of them all!  On the race website they describe it as 1000 feet elevation gain in 1 mile.  Overall, I found myself running more of the hills than ever, and I felt like the grunt trail was nothing much to whine about.  It was steep for sure, and very rocky, but it felt like it was pretty short in duration.   I saw a upside down, dilapidated car on the way up, and the climb passed quickly as I thought about the many possibilities of how it got to be on that steep embankment.  Hmmmmm . . . . 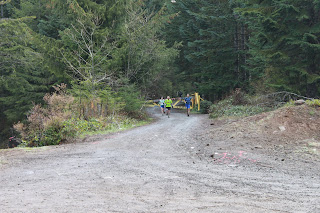 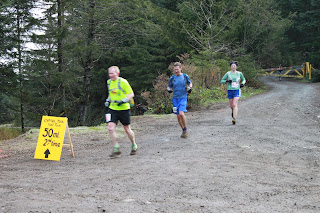 coming into Aid #3 at 16.9 miles.  Looking fresh!
RADIO TOWERS
At the top of the peak were the "towers", radio towers that is.  Or perhaps I should say that I think they are radio towers, as I am no expert in the field of radio tower identification.  They were big and tall with dish-shaped thingies on them and big thick wires pointing toward the sky.  And they were fenced off.  Yikes, what am I writing about...  I wish I had a picture of them.  Then you could tell me.  Just over the hill from the towers was mile 16.8 and Aid Station #4.  BTW, the volunteers at the aid stations were incredibly helpful, filling up my pack for me with a friendly upbeat attitude.
OVER THE HILLS AND THROUGH THE WOODS. . .
to Aid station #5 at 21.1 miles.  The 3.1 miles to Aid #5 was rolling and mostly down hill.  I am thinking it's nice now, but I'm going to have to climb this on the way back!  It was a lovely treed trail with the occasional patch of pretty white flowers.  It was this section of the trail that I got to see the front runners booking their way back up the trail toward mile 30.  Fast! 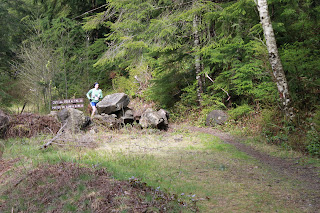 Coming into Aid #5 (21.5 miles)
THE NEVER ENDING LOOP
By the time I reached Aid #5 at mile 21.5 my knee was beginning to hurt.  My entire right leg was hurting, but the back of my knee in particular.  This was a new experience.  I have never had the pain so concentrated.  As I entered the 4 mile loop I stopped and stretched my calf and hamstrings (hence my posterior knee) on a tree.  A woman I had been running with off-and-on caught up to me and asked me about my leg.  No, not cramps I said, it just hurts.
"Are you on drugs?" She asked
"What?" I said taken aback.
"Ibuprofen," she replied with a laugh.
"Oh, oh, no.  I read that could damage your kidneys and mess with your temperature regulation."
"No, just drink lots of water.  You can take 2 to 4,"  She replied.
Hm, I thought. . . I do want to finish, comfortably. Or relatively comfortably.  When I saw Luc at the end of the loop (mile 25.5) he got me an Ibuprofen.  Just one I said.  Forget 2 to 4!  At some point in the next few miles the Ibuprofen did its job and the pain lost its edge, but it was still there.  I probably could have taken more, but I'd rather be nice on my kidneys for now.
THE HARDEST PART
I'm not sure why, but the 4.5 miles to Aid #6 at 30.1 miles was the toughest part of the race mentally.  Maybe it was my aching knee or that I had just done 25 miles and was only halfway finished or that we were climbing capitol peak again . . . most likely it was a combination of all the above.  As I got closer to the aid station my energy increased.  By the time I arrived, I was mentally prepared to tackle the last 20 miles.
A GOOD DOWNHILL RUNNING PARTNER
After climbing the towers again the trail veared off to the left away from Grunt Trail, but downhill nonetheless, often steeply so.  It was at this point that I had a good, long conversation with a UW student that made the time pass by quickly.  Thank you, thank you, thank you!  Just what I needed a distraction!  We sped down the rocky, treacherous trail chatting away the miles.  I kept consuming gels and Clif blocks to keep up my energy washed down with Nuun electrolyte drink in my hydration pack.  I made an effort to refuel like this about 2x every hour, more if I could handle it.  It was difficult to eat and run, especially so because I had no saliva to swallow the dry food with and a lingering , but mild nausea followed me.  Yuck!  I don't want to see another gel for a long, long time!
IT'S WARMING UP
Yesterday I was encouraged by the weather report for race day, cloudy (no rain) and 10 degrees warmer (62 F).  As I got closer to Aid # 7 at 37.2 miles (Mt. Molly) that seemed to be coming true, although even better, the sun was out!  Yes! I was glad to be wearing shorts!  I began considering shedding my long sleeve shirt as we ran downhill through a clear cut, but I was making good time and I was too focused on the next aid station to stop.
END WITHIN SIGHT
By mile 37, I felt like the tables were turning toward completing the 50 miler.  My miles finished were stacking up against the few miles I had left (only half a marathon!).  Plus, I was excited to be meeting Luc at Aid #8 (41.5) miles, where we would run the last 8.5 miles to the finish together.  I hoped that it would motivate me to push hard through the last bit.  I usually find that I lose a lot of time in the last 1/4 of these long races as my motivation wanes.  Not this time!
PACER LUC TO THE RESCUE
Despite being new to running (just within the last month) Luc happily agreed to run with me for the last 8.5 miles, and I promised that it would be relatively easy for him as I would be tired by that time.  The longest he had ever run was about 5-6 miles, so this would be a challenge for him too.
As I turned the corner into Aid #8, Luc was there waiting with a smile.  A volunteer quickly refilled my water pack, I grabbed some pretzels, and I was off!  It was nice to have Luc's energetic and positive energy, as I was feeling more than a little worn down and grumpy.  I just wanted to be done!  As we climbed through a clear cut, we began passing people.  There was something about running as a team that felt powerful and energizing.  As we got closer to Aid #9 roughly 5 miles from the finish, we realized I could finish in under 10 hours, a full hour faster than I expected, if we booked it to the finish.  Lucky for me the trail to the finish was mostly downhill.  Mostly, but not entirely.  We still had miles of muddy, slippery trails to run through!
As Luc and I flew past other runners, our energy and excitement grew.  We were getting so close to my goal of finishing and an extra special prize of getting under 10 hours.  How could I push so hard for so long and not do it?  I splashed right through the middle of the puddles, with no care for getting wet.  It felt good to let my legs unravel.  The pain dissipated and I was on some kind spectacular high.  Not a single person passed us in those last 8.5 miles, but we passed close to a dozen.  I finished the race stronger than I started it, with a time of 9:55:00.  A full 3 hours more running than I have ever done. 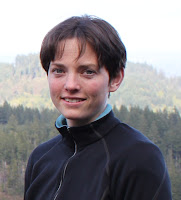 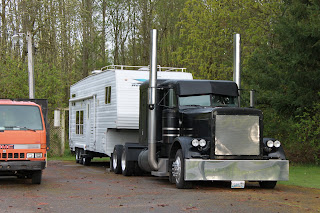 Whenever I give Luc my camera for a day, I get pictures like the one above.  Funny huh?  Luc says that this picture captures the vibe of the town.