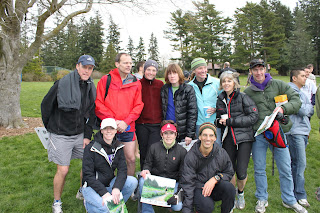 South Whidbey (Down Sound Racers- DSR) represents at Chuckanut Mountain 50K in Bellingham March 20th.  Kick-ass times and lots of PR's.
(I'm 3rd from the left, upper row)
All Photos courtesy Susan Janow, thanks Susan!
I can walk today!  Here I am writing to you a day after finishing the Chuckanut Mountain 50K.  Very, very cool.  After the Orcas Island 50K a moth ago (Feb. 6th) I was wiped out.  I barely was able to walk for a day, maybe two.  Oh, it was painful.  Being that it was my first 50K and it was one of the toughest around, I understand why.  Orcas has 7,000 feet elevation gain (and decline!) over its 31 to 35 miles.  We climbed four major "peaks" to make our way to the finish.  We earned it, but not without some bodily pay-back.  Ouch.
Chuckanut's elevation gain is 3,500 feet, half of Orcas'.  That combined with my experience, allowed me to have an easy recovery post race and day after race.  In fact, I went for a swim today.  Lap swim in the pool.  I really felt it in my chest/lungs, and an overall tired body feeling. 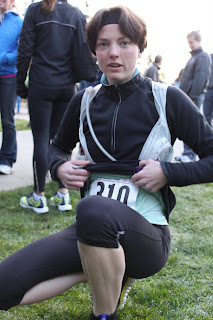 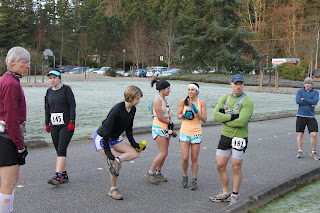 Seriously ladies, how do you do it?  Tank tops and shorts in 35 degree weather?! 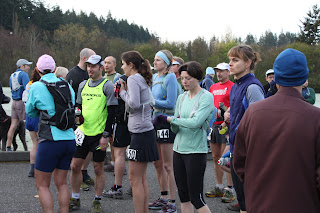 Setting my watch for the start, almost ready to go! 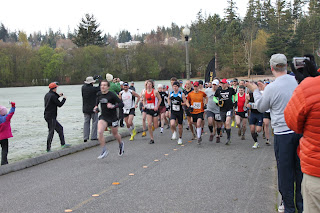 And they're off!!!!!
The Race
Chuckanut starts and ends with a mostly flat 10K (6.something miles).  The 10K is on the interurban trail in Bellingham, a lovely 2-bike wide trail that follows historic Chuckanut Drive and the coast for 6 miles, connecting with trails and dirt roads that lead up Chuckanut mountain.  The first aid station was at 6.1 miles, at the base of the mountain.  Read to climb runners?  Here we go! 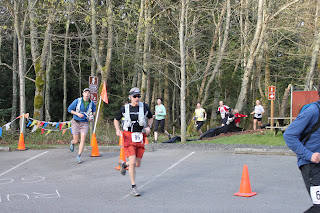 Coming in to Aid Station #1
After Aid Station #1 the trail almost immediately begins to ascend.  Nothing too dramatic, but a lot like a regular mountain hike, you know the kind you walk up and it takes you all day?  The trail weaves around trees and Fragrance Lake, with rocks jutting down the sides of the trail and across the trail.  More than a few times we had to grasp roots and rocks to climb up them or steady our jump down.  This single-track winding trail continued all the way to Aid Station #2 at 10.4 miles. 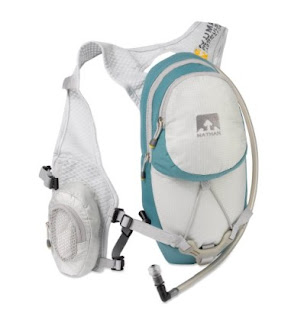 Nathan Hydration Pack
By this time I had to refill my pack, which was incredibly difficult considering that my hands were still cold and didn't seem to be properly connecting with my brain.  When we started the race, there was frost on the ground and icy blue skies, with a promise of warmer temperatures.  I have a Nathan Hydration Pack that carries 20oz of water, but you have to unzip it then unscrew the bladder pack, refill it and (here's the hard part) re-thread the cap back on.  Ack!  How many times do I have to try to get it on!  Finally success, and I'm off.  The trail turns into a dirt road, Cleater Road, which rather painfully runs steadily uphill for 3 or so miles, until you turn onto the beautiful Chuckanut Ridge Trail.  To see pictures of it, visit Bellingham Herald Blog here.
In the case of the Ridge Trail, beauty is not without its shortcomings!  The views from the trail were as lovely as the trail was treacherous.  Look too long at the dreamy clear-sky view of Mt. Baker and risk stumbling head over heals to the green island jutting out from blue waters.  Or trip over one of the many roots or rocks in the trail.  The ridge trail boasted the most magnificent views of the entire race, but also required the most concentration and technical ability.
Chuckanut Ridge Trail ended at Aid Station #4 (20.2 miles- yay 2/3 done!) and marked the start of the aptly named and steep Chin Scraper trail.  At this point in the race I had already battled nausea, stomach cramps, and mild dizziness so Chinscraper was at the least demoralizing.  Luckily for me it was no Orcas Island 50K, the misery was over after less than a mile.
From there the trail turned into a wide dirt road and I slowly picked off runners who where noticeably exhausted from the previous 22 miles (not that I wasn't!).  It was at this point that I tripped twice in just a few minutes over invisible tripping-on-type-things.  In other words I really don't know what I tripped over but it was most likely some nature based material like a rock or root.  This is when you know that you are getting tired.  Sloppy footwork.  The first time I tripped I was clomping down the trail just behind a male racer.  I must have scared him a bit because he laughed and said, too bad you didn't knock me all the way down the trail and save me the trouble.  And I said, "Good plan, then you could blame it on the crazy lady runner,"  Hahahaha.
A minute after passing him I stumbled yet again (more noticeably I might add) and I heard him shout playfully, "Crazy lady!"
I yelled back, "Too bad you weren't closer I would've helped you down the trail."
As the dirt road endlessly weaved down through the trees I could see we were slowly returning to a more sea-level elevation, which could only mean that the last Aid Station at Mile 24.6 was coming up.  After Aid station #5, there was only the dreaded 10K back to the finish line.  Let me put it this way, after you have pounded out several miles at a good downhill grade, 6 more level miles feels very slow, and not so flat.
My friend and honorary race photographer for the day, Susan met me just before the last aid station snapping off photographs and sprinting with me (OK, it wasn't so much of a sprint, my mind was a bit loosey-goosey by this point).  "Oooooh, my back hurts so bad," I whined to her among other things. 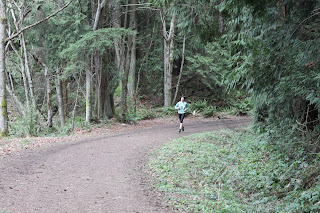 As expected the last 10K was monotonous, but passed rather quickly considering.  After running for hours on end one more hour isn't so long after all.  It was in the last 6 miles that I had to stop briefly to check in with my breathing and lungs.  My chest had felt increasingly tight to the point of being rather uncomfortable and I stopped to see how breathing felt.  Not good.  Deep breaths were not coming easily, but within a minute I focused my mind and body and resumed my normal breathing.  Whew.  Three more miles to go! Candice and Blake at the finish, photo courtesy Rosemarie Donnelly
I was getting really close to the end by this point.  Two awesome guys from Whidbey's Down Sound Racing  helped me to the finish by way of mental support.  Thanks Blake and Brandon!  The last 100 meters were at a nice downhill slope and all the strain and stress of the miles lifted away as I sprinted to the finish! 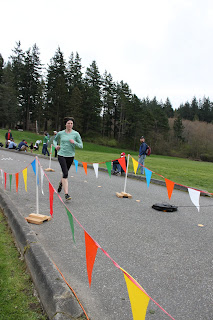 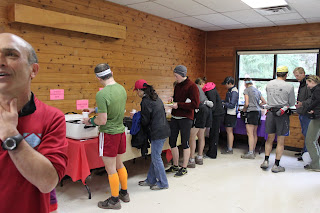 Post race fueling up, they had a great sandwich bar and several soups. 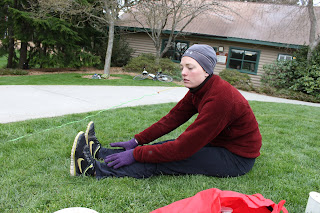 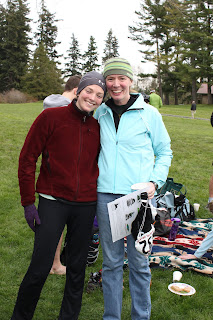 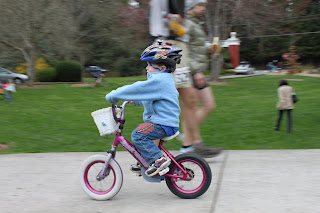 This kid was amazing! He's riding a bike without training wheels and he's what 2 1/2? 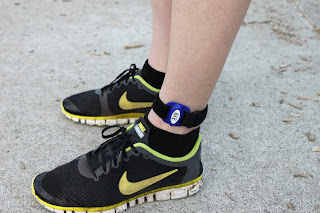 Here are my running shoes, Nike Free 3.0, minimalistic.
You can also see my timing chip on my left leg. 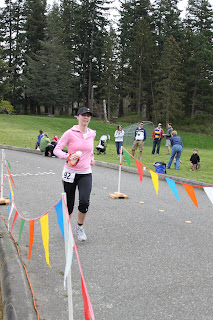 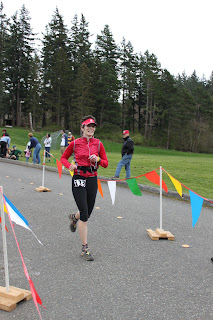 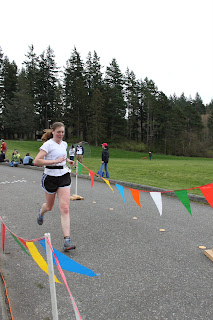 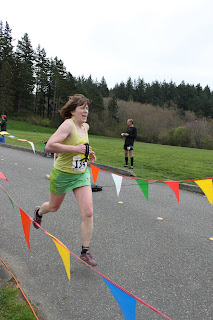 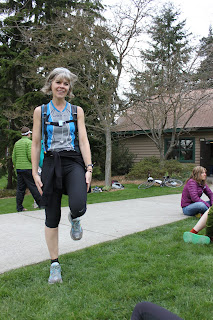 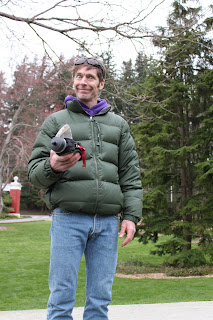