"This must be the last hill," I thought as I scrambled up the hillside using both my hands and feet.  Every time I thought that "last" hill thought, I was invariably not on the last hill, but more like half way up the hills.  A comforting thought nonetheless.  The Orcas Island 50K consisted of 4 major "climbs," four descents, and a fair amount of flat running around Mountain Lake and Cascade Lake.

The race begins with a climb up Pickett Mountain and a quick run down.  At around mile 11 you come to the first aid station at Camp Moran (also the start of the race).  I was feeling good at Mile 11, filled up my Nathan Hydration Pack and off I went, thinking, Okay, I am 1/3 of the way done! 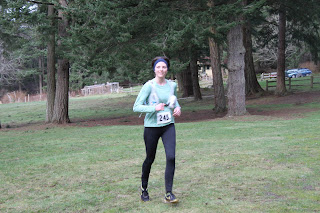 Smiling as I come into the first Aid Station at mile 11 (above), wearing my hydration pack 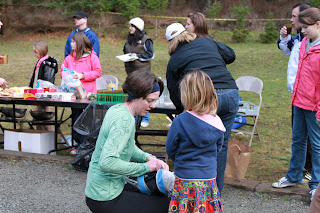 Marina and family greet me at Mile 11.  Filled up my pack with Nuun electrolyte water, which I used the entire race.  I went through 4 packs (2 liters per pack) of water throughout the 31+ miles.  I also brought my lightweight jacket, which I never needed, oops.
The next leg of the race was the toughest as we climbed multiple steep inclines, one after another, until we *finally* began our decent toward Mountain Lake, a welcome change from the uphill climb, but a painful one!  I rounded Mountain Lake wondering when I would reach the "water only" aid station at mile 21.  It is important to note that the miles were not marked at any point on the trails, and I was left feeling glad that I had studied the online maps so that I had some idea of my mileage at various points. 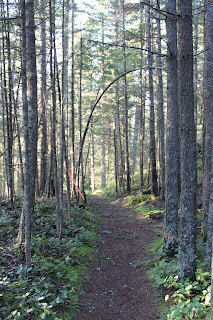 The trails were marked with red tape
As I rounded a corner I saw a bridge and about 20 gallon water jugs.  It was the water aid station, I must be at mile 21!  A mixed blessing considering we were about to climb Mt. Constitution.  I was feeling tired but upbeat at this point in the race.  As it turned out, the climb up Mt. Constitution was easier than the steeper climb right after mile 11.  A big relief to my legs and mind.  I arrived at the top of the mountain to an incredible sunny and clear view of Puget Sound, the San Juan Islands, and Aid Station #2 at mile 25-ish.  The climb worth every moment!  At the Aid Station I was informed that we had 7-9 more miles, and I thought, alright, only a little longer than I had planned on, but it's all downhill and flat so no problem. 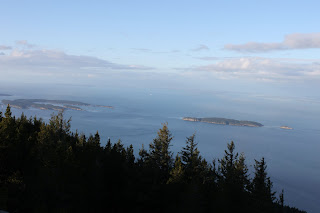 Above and below: View from the top of Mt. Constitution 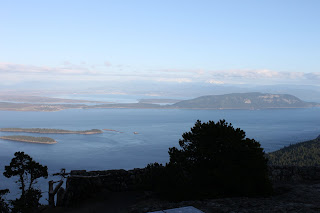 Um, wrong!  We ran downhill for a mile or two before we began running uphill, again, for longer than I would wish on any runner after 28 miles.  The last downhill was excrutiating and I passed several runners who succumbed to the painful downhill and were limping and and some who were walking to the finish.  I was encouraged to blast through my pain by the fact that gravity was helping my tired legs and I knew to use the downhill to my advantage to meet my time goal of under 7 hours.

At the bottom of the mountain we crossed the road and began the last part of the run around Cascade Lake, a 2.5 mile stretch.  The last 400 meters was a small (but significant) uphill then a nice rolling downhill to the finish.  If you are planning to run this race, remember to run those last few uphills, you are almost there, and you'll be glad you did!

I finished strong, in what felt to me like a sprint!  I felt incredibly good after the race.  I was more prepared for the distance and elevation than I expected.  The after-party at Camp Moran included soup, snacks, cookies, beer, juice, and the Blackberry Bushes String band.  We all relaxed and enjoyed the post race chill atmosphere.  I was lucky to get a chance to say goodbye to some of my friends who ran the 25K and my friend who also ran the 50K, all from Whidbey Island, as they were just leaving Orcas to head home. My girls enjoyed the juice and danced to the music, while Luc took the majority of the after party pics, with me enjoying sitting after the long run. 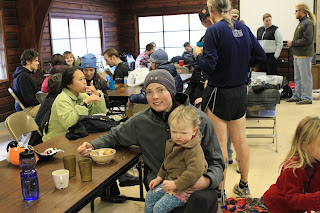 Above: bundled after the race in two coats, hat, and  . . . Stella!  I knew from previous experience to have lots of warm clothes waiting.  Pictured at Camp Moran.
Day after race update: walking was very difficult this morning, and still is as I write this, but sitting in my chair I can pretend like my legs feel fine.  My neck, jaw (what's up with that?), chest, throat, shoulders, arms, heck everything is sore to some degree!  The most painful time after a race, other than the inevitable gut wrenching, is when you wake up the next morning.  I noticed "day after" soreness phenom after the Seattle Marathon and today as well.   Yet, now that the worst soreness is over, I'm ready for the next big race! 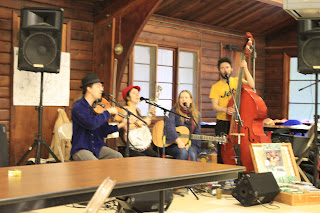 The Blackberry Bushes String Band, the after party 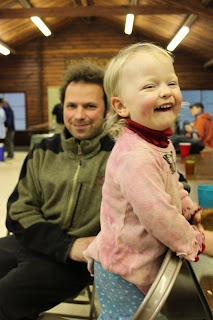 Stella, above and below, begins to warm up to the party and flashes her big smiles 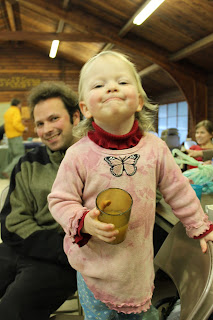 The apple juice, above, helped. 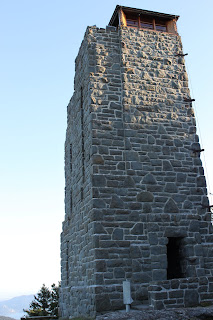 Above is a picture of the incredible lookout tower that is at the top of Mt. Constitution.  You can follow a stair case to the top.  It was built in the early 1900s. 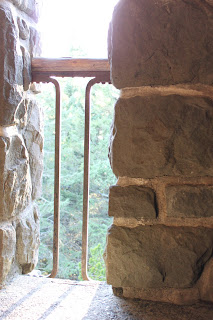 Above and below: Some views inside the tower 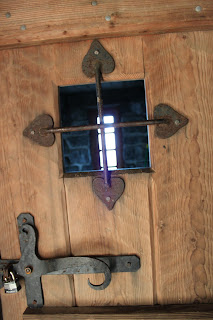 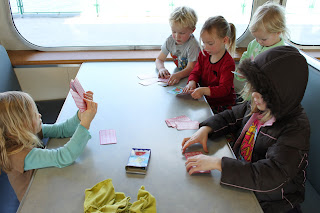 Above: my kids and their friends play cards on the Orcas island/ Anacortes Ferry.