Pacing Hardrock with the Trail Angels

The Pre-HR Ramble
I admit it was a little painful to pace and not be running the race this year.  I can't complain though, I have only been trying to get into the race for 2 years.  I know of others who have tried for more than 5 years.  It is surprisingly difficult to get into through the lottery. You'd think that due to the toughness of the course, the steepness of the mountains, the altitude, and the monsoons that people would hold back from putting in to the lottery... but really what happens is that people figure they won't get in so they enter the lottery thinking that if they get in, well so be it! 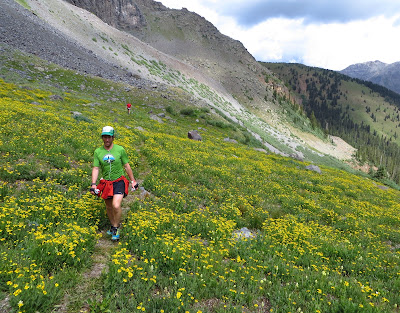 Enough about frustrating lotteries!  I was lucky enough to get to crew and pace James for the race this year.  I crewed all day from the start at 6am until pacing at 8:30am the next morning!  Luckily I was able to sneak in a short 1 hour nap in Telluride and then at Chapman just before pacing. Each time I awoke afraid I'd missed him coming though.  An hour seemed like an entire night because of my anxiety, but I could feel a lingering fatigue.  I can only imagine what the runners felt like!

Because I am running the 165 mile Tahoe Rim Trail this Friday, I decided to only pace ~20 miles of Hardrock.  I believe in tapering and it just seemed like a bad idea to overdue it so close to such a big effort.

My First Gig Pacing at HR
I waited at Chapman Aid Station, mile 81, for a few hours before James came in.  Just as I was starting to worry about him, our good friend Billy came into the Aid Station and said that James was on his way, just another 10 minutes back.  James came into the aid station looking a bit weary and sore.  We took quite a bit of time there making sure that he had enough to eat and drink since he had become quite deficient in the past 10 miles (and probably even before that).

I knew the biggest challenge pacing this section would be patience and gentle prodding: finding that sweet spot where I was encouraging my runner to do his best without crushing him any more than he already was.  It was important to try to get him to eat and drink plenty of water.  This ended up being a pretty big challenge because he was feeling sick and it took a while before his stomach was settled. 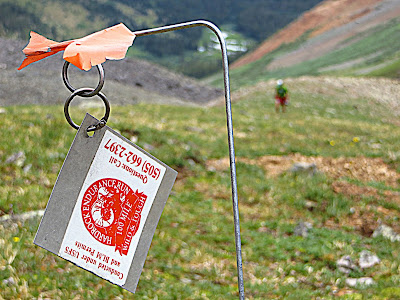 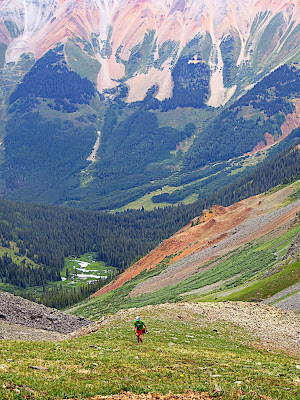 Trail Angels
Something truly amazing happened in those last 10 miles of Hardrock.  Some might call it the Hardrock spirit, and it was, but really it was also the best of human nature and collaboration shining through a dark, challenging time.  James was at a point where he was very sore. He couldn't really run anymore and at times a lack of energy was intense enough that he would have it sit and rest.  He told me just before we saw the trail angels that the last 10 miles might take us 10 hours.  I was a bit horrified.  As much as I wanted to pace, I really am a bit impatient to get 'er going!  I would've done anything to get James to the finish this year, if that's what it took.  But.... the thought of 10 more hours was overwhelming.  Plus I knew that he was feeling a little negative and that even at the pace we were going it wouldn't be that slow.

We had just been passed by two Hardrock pros- Betsy Nye (12 finishes) and Black Wood (17 finishes) and their pacers while we were sitting on a log resting when two friends who we'd just met from doing the 4 Pass Loop out of Crested Butte, David Wilcox (runner) and Danny (his pacer) caught up with us.  David said, C'mon let's do this together!

James responded with something like, Go on ahead I'm going way slower than you.

I interrupted him to say, Yeah! We'll go along with you, great idea!

James looked unsure, then I suppose he realized he had nothing to lose and said, Why not?  That was the start of a nice steady hike up the tough climb from KT to Putnam, with almost no sitting.  Truly an accomplishment!  We chatted and laughed and Dave and James groaned and hobbled through those miles.  But they did it together and together we made a strong team.


We distracted each other, encouraged each other, laughed at the insane rockiness that we'd never noticed on the Bear Creek section and let go of any attachment to finishing time.  Neither Dave nor James were going to get a PR, and they decided that they were better off enjoying those last few miles with the company of friends, than pushing for some elusive "goal".

I was deeply touched what happened on the trail.  Something so simple was so meaningful.  One runner gave up an hour (or more?) of his final race time to hang with a friend who needed company.  I sure hope that I can let go of my ego like I saw on that trail that day.  I hope for humanity's sake, that we all can so that we all might know and experience like I did, the gentle, loving, and compassionate side of humanity.  Thank you trail angels!