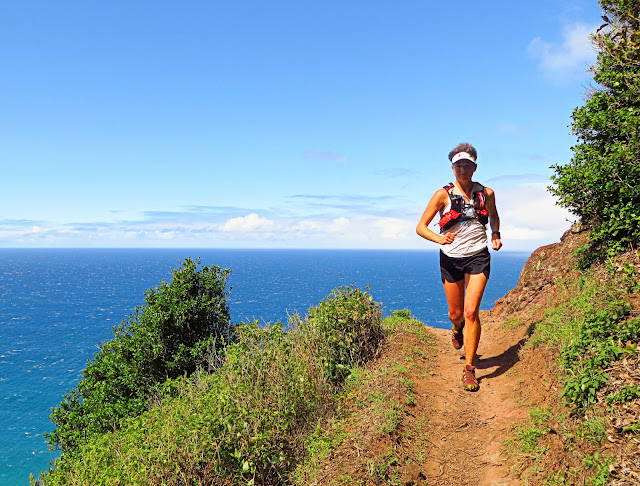 I've been saving the best for last: the Na Pali Coast Trail!  This was also my last run on the island of Kauai and is arguably the most scenic trail in Hawaii.  It is an 11 mile run to Kalalau on the Na Pali Coast Trail, then another 11 miles back. All in all, it's a 22 mile route (23.5 miles for us as we had our stuff stashed in the woods 3/4 of a mile from the trail head).

The day started out by getting kicked out of a campground and almost ticketed. James and I were planning to set up a tent at the campground near the start of the Na Pali Coast Trail, but as it turned out, the campground didn't open until 11am and we were there at 9am.  We thought if we set up our tent before we ran the arduous 22 mile Na Pali Coast Trail, we could collapse into it when we were done.  The ranger was rather unfriendly and threatening at 9am and after James walked away from him in a huff, the ranger really turned mean. I tried to reason with him, but clearly he'd made up his mind that we were tourists with no respect for the local customs.
The combination of the ranger kicking us out with our tent already 3/4 of the way set up and the homeless man watching from the bathrooms convinced us  that we'd better stash all our belongings in the jungle up the road (and out of sight) from the campground to ensure that nothing would be stolen when we got back 8 hours later.  We weren't willing to wait until 11am to set up our tent.  Plus, we were told we weren't allowed at that campground at all after the ranger blew up about James' walking off.  We hit the trail by 10am with all our belongings covered by a very conveniently brown colored tarp in the jungle.

The trail begins very crowded with hikers, muddy, and uphill.  It almost immediately offers incredible views of the impossibly blue ocean with vegetation that appears to have been planted from a sci-fi movie or the era of dinosaurs (at least to a native Washingtonian like me).  After 2 miles, tourists became fewer and farther between (thank god) and we crossed a few streams that can be incredibly dangerous when the area gets a lot of rain.  Just recently I read an article about 52 hikers who were stranded on one side of the stream when it grew to a river in just a few minutes.  Sadly, one woman died trying to cross the stream.  Today though, the stream was a pleasant knee high and the cool water felt good on the hot, sunny day.

The trail undulates up and down but follows the coast line the entire way out to Kalalau.  All this up-and-down translates to nealy 8,000 ft of climbing in just 22 miles.  For most of the trail, we enjoyed expansive and stunning views of the ocean.  Along the way we passed hikers from time to time who either looked like they'd walked out of a hippy commune complete with in some cases bare feet, tanned bodies, and lots of facial hair (men of course). The other types of hikers looked fresh and relatively clean (and pale skinned) and loaded with their heavy packs ready for a week or two of camping.  One woman heading back on the trail was burned red as a fresh piece of grocery store-dyed salmon, on every visible part of her skin.  Another woman was completely naked talking to an old grey bearded man, her long chestnut hair to her shoulder blades and her plump body, tan by weeks (?) in the sun.  A man headed back on the trail had a big overnighting hiking pack that looked nearly empy and long dreaded hair with tan skin that the dirt blended well with, he said he was headed out as there was too much stealing and drama at the end of the trail.
The Na Pali Coast Trail ends at a picturesque white sand beach that smiles into the ocean.  The waves grab hard at the beach as they roll into the shore.  Signs warn that hikers that people should not swim due to strong side currents and after standing in the water where it touches the sand, I believe it!  The waves pull violently back at your legs as they rush into the ocean.  The trail is lined with campsites in the woods just above the beach.  I think of the stories I heard before we hiked this trail, of people who live here more than a few weeks.  Of a hippy community at the end of the trail where the person who brings the most booze, chocolate, and cigarettes is king.  It all seems so perfect. The perfect getaway from our modern living of constant calls, texts, emails, and facebook.  A truly simple life. But I still have 11 miles to run, and if I don't hurry, it will be dark soon. 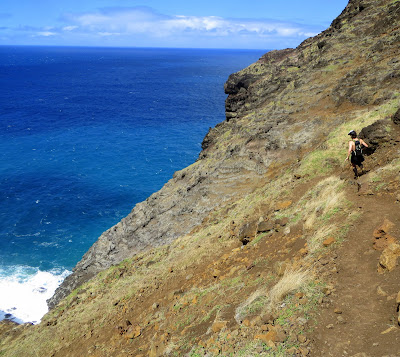 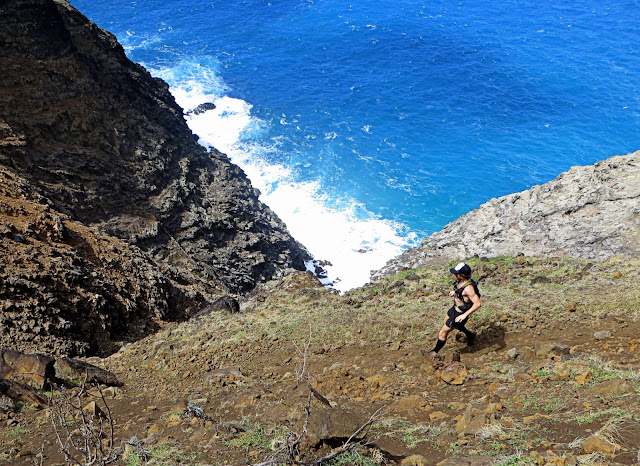 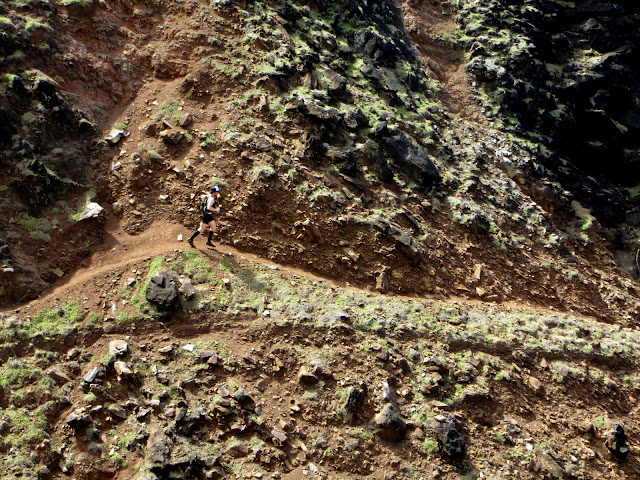 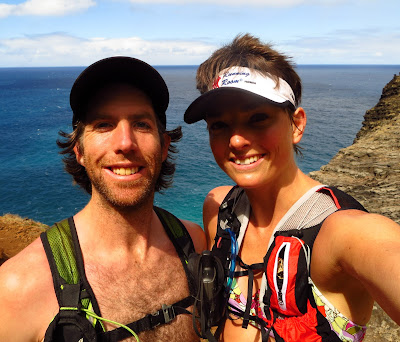 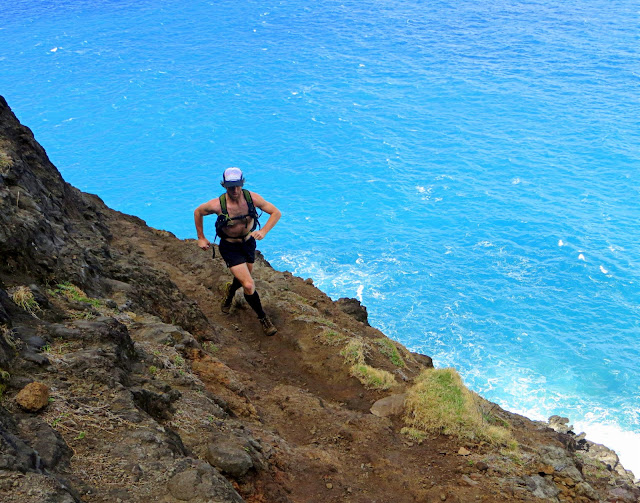 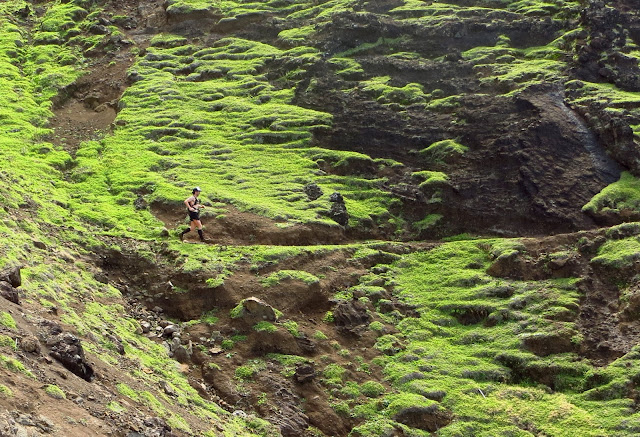 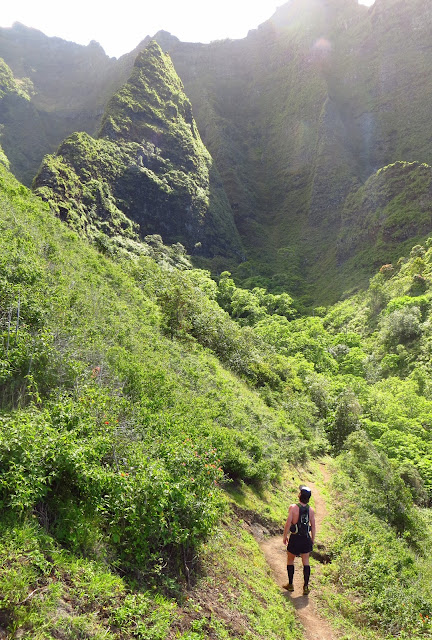 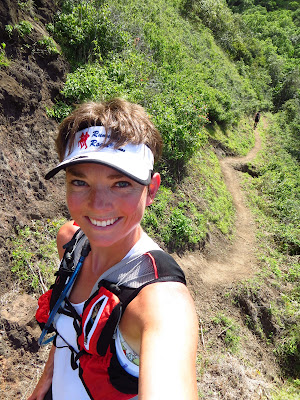 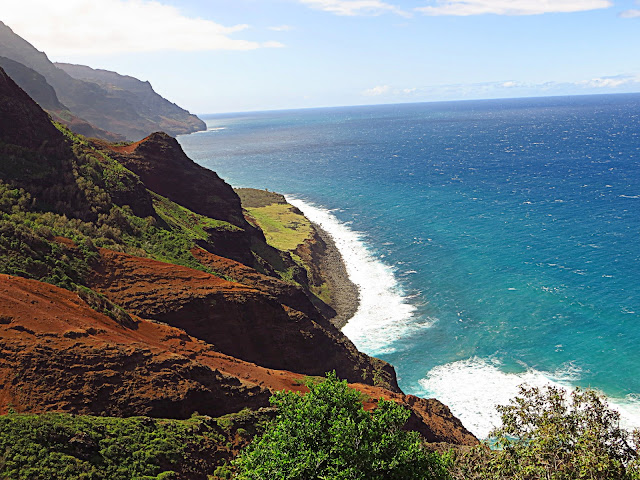 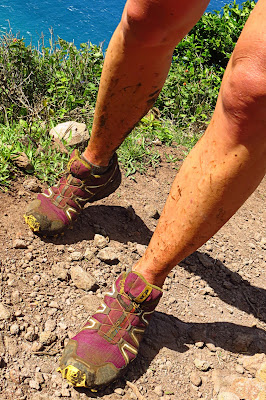 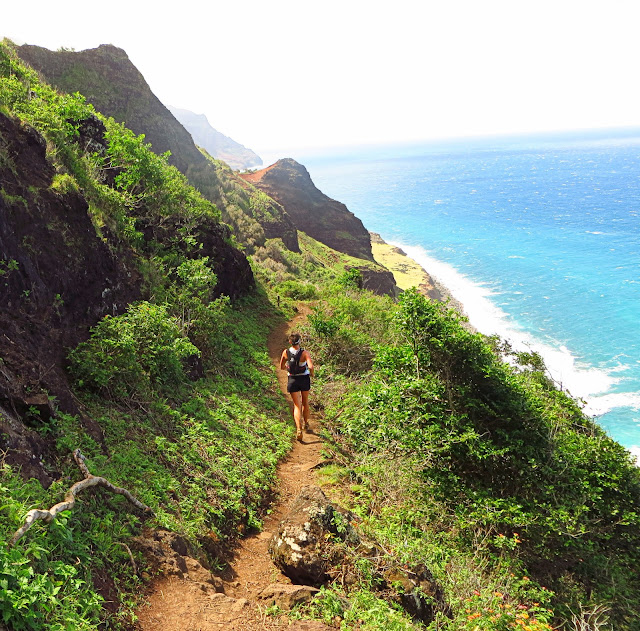 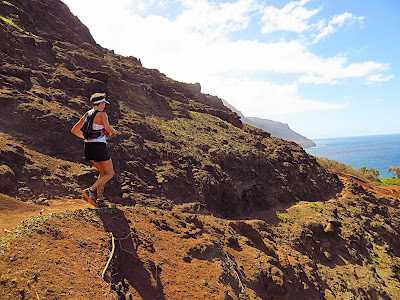 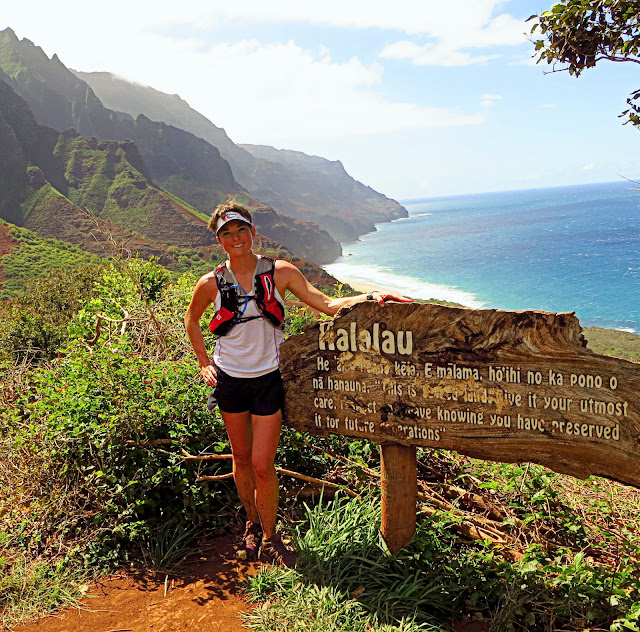 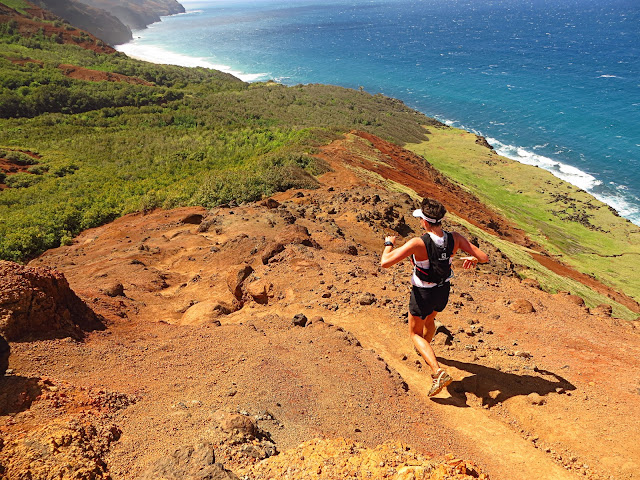 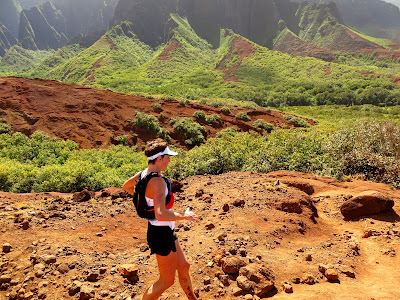 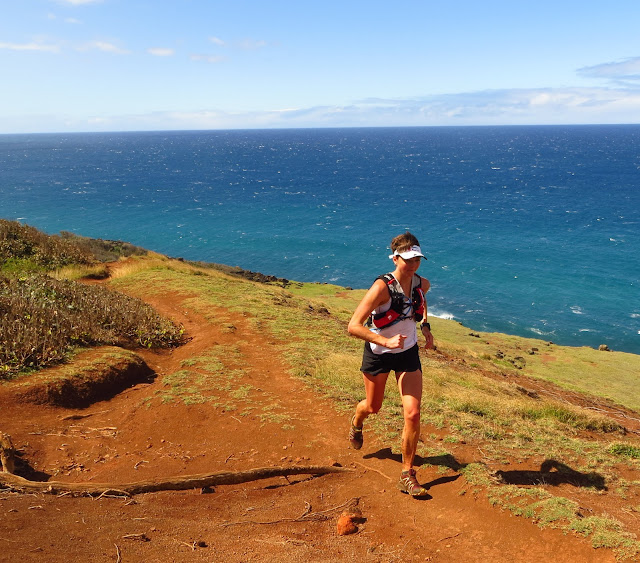 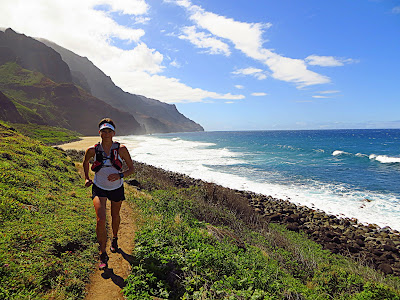 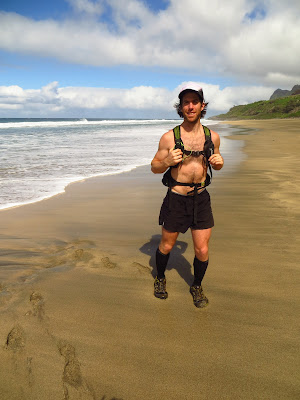 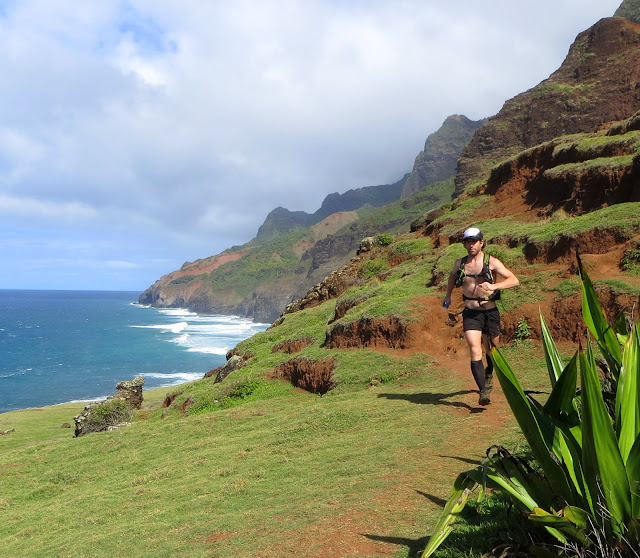 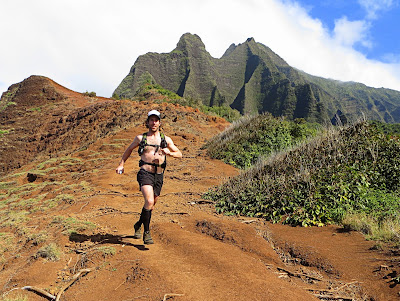 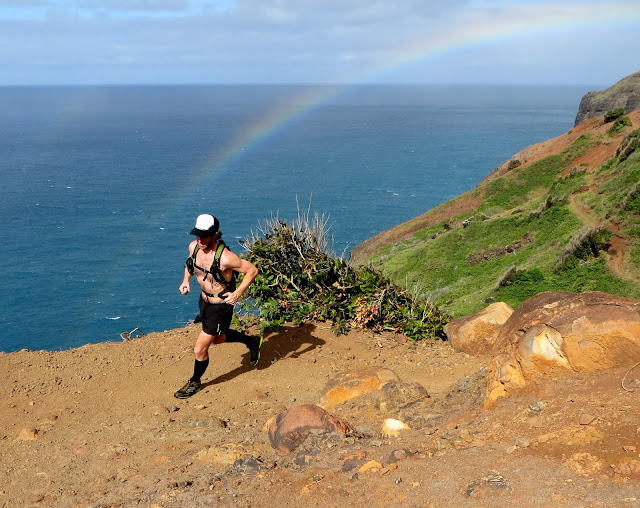 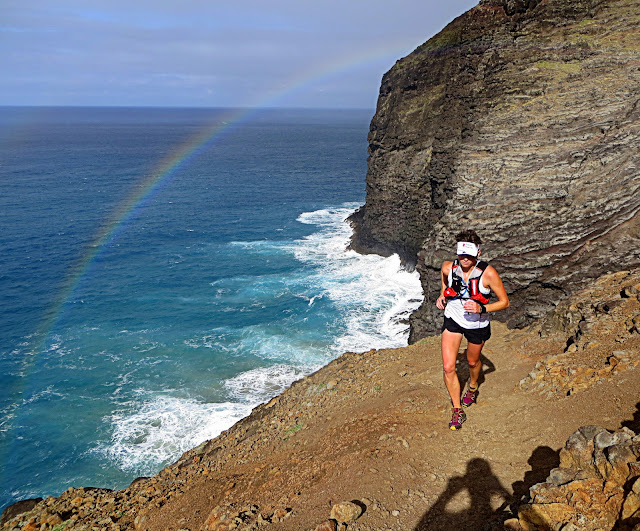 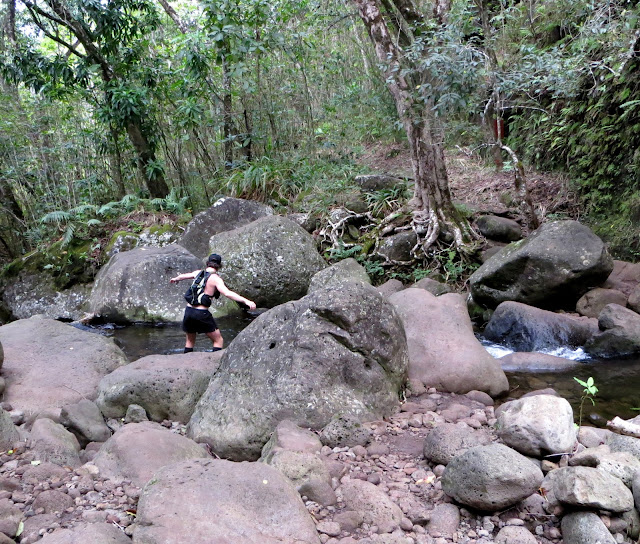 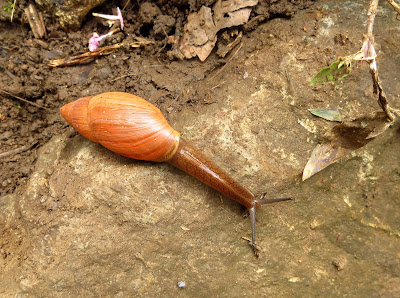 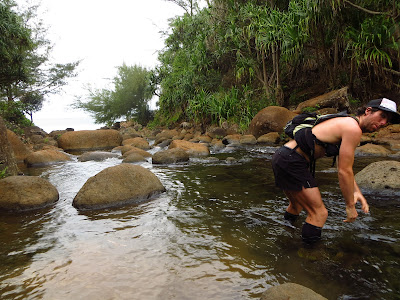