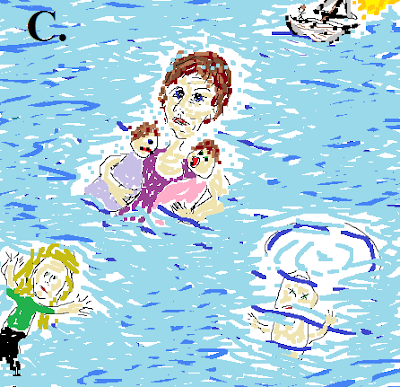 I had such an intense dream last night I knew I needed to illustrate it.  Seeing babies drown is such a traumatic event.  And my vision was only in a dream.  While I slept, I dreamed that I was on a ferry going to Whidbey Island.  The ferry didn't slow down for the dock, and the boat banged into it the dock, hard.  On the deck of the ferry a bunch of kids were playing, from 2 years old to 7 or 8 years old.  The impact threw all the kids off the boat and into the water.  Only one 7 year old child was able to float on her back, the others were either struggling to stay just above the water or they were drowning.  Even though I was with other adults, I was the only one to jump in the water after the babies.

I grabbed two young children right away but they were heavy and I was having trouble staying afloat. In terror, I watched babies sinking before my eyes.  There was nothing to put the children on and go after the drowning kids.  I treaded water helplessly, wishing that someone would jump in and help me.

I woke in that moment, feeling the terror, the helplessness, and the desire to save the children in the dream.  It was so real, and so hard to understand that it had not really just happened.