It's an unnerving, exciting responsibility to lead a pack of runners.  In my case, to be the first woman to cross the finish line (or for you guys, to be the first man).  The longer you lead, the harder it is to give it up.  Every once in a while, I have the pleasure and stress of winning a race (not overall, but in this case I'm referring to first place woman).  That's why last weekend's out-and back course at the Woolley 50k in Sedro Woolley was good.  At the 15.7 mile turnaround, I counted the minutes that it took for me to see the next woman coming toward me.  Six minutes.  That meant she was about 12 minutes behind me total.  A pretty good lead, but with 15 miles to go, close enough that I felt like I had to stay on my toes.  In the end, I finished 20 minutes before the next woman, so I didn't have anything to worry about afterall.

I love a good flat trail course.  It's comforting to know that the trail will be mostly unchanging for entire race. here are also times that I wished for some downhills. We ran on a rails to trails path.  I was able to stay pretty consistent with my mile splits, until the last 6 miles when I slowed down a bit.  My legs and lower back were aching bad and I was really cold.  It rained on us for the majority of the race.  I don't do so well in that kind of cold, and this race was no exception.  By mile 18, I borrowed some gloves from Matt Hagen, who kindly insisted I take them when I couldn't work the Gatorade dispenser.  My pullover shirt was soaked.  I could have rung it out.  So I suffered a bit the last 13 miles being cold and achy.  But it was fun, nonetheless!  I knew I'd be fine in the end.  I'd just have to blast the heat in the car for the ride home, which is exactly what I did.

My sprained ankle (from 2/4) did okay.  No pain, but some uncomfortable tendonitis on the front of the ankle that afternoon and today and a fair amount of swelling in the ankle.  My calves were really sore from the exertion as well.  After a tough 2nd half of last year, it was nice to win a race.  Especially nice considering that I haven't run a 50k since last September's Cle Elum Ridge 50k.

What I ran with:
1 packet of jelly beans and ipod.
I used 2 or 3 gels and had 2-3 mid-sized cups of water per aid station

Posted by Candice at 9:00 PM No comments:

Some good news...and some bad news...

I've been struggling with what I found out is Raynaud's Syndrome.  Wikipedia describes it as "hyperactivation of the sympathetic system causing extreme vasoconstriction of the peripheral blood vessels, leading to tissue hypoxia."  Very reassuring.  So I have taken some pictures for your amusement.  I get it mostly after a run.  It can get really bad after a run.  One day it took driving 2 hours from Whidbey to Bellingham with the heat full blast the entire time to warm up.  Yep, 2 hours.  In most cases it just requires a hot shower to warm up.  My toes are usually numb for the first few miles of a run, regardless of my pace.  I'll be sweating and hot, but my toes will be numb.

I ran at Blanchard Mountain today with James.  We did the proposed 10k course.  I LOVE IT!!! It was so much fun!  1,300 feet of climbing and this time of the year, lots of mud.  But come race day (July) the single track will be some of the best in the country.  Running up Oyster Trail toward Oyster Dome, my thoughts are that the trail is much like the rough edge of an oyster shell if the oyster was opening up into the sky and I was running along the edge ~up~up~up.  I had a lot of energy.

Here's my do-at-home Crossfit workout:
Timed, as fast as you can without sacrificing your form.
4 repeats of:
10 Kettlebell swings with 35#
15 Kettlebell Two Arm Pull with Squat 35#
5 Single leg squats on each side
10 Burpees
30 Second plank (on your elbows), tight core
20 Floor dips
15 V sit ups
15 Elbow to knee situps

Posted by Candice at 9:26 PM No comments:

And....I'm back!  I have a lot of stories to tell you, but for now, I'm pretty excited to see Joel Balezza's article on "Love on the Run".  Do you see James and me on page 1?  You can find it in Northwest Runner. 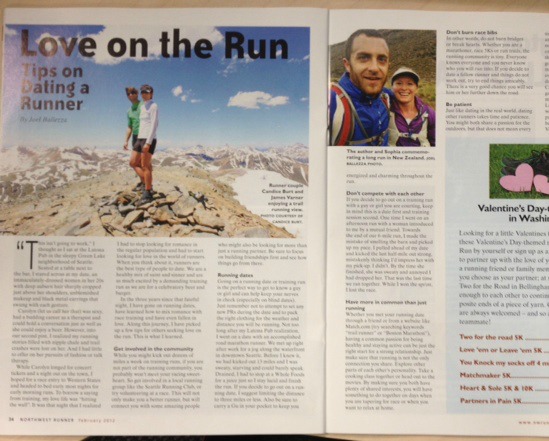 Posted by Candice at 6:38 PM No comments: