You thought running an ultra was hard! Volunteering at Gorge Waterfalls 50K

I have a lot of respect for good race directors. First of all, imagine the challenge of finding a trail worthy of an ultra, one that people would travel across the US to run, for example.  Then mapping it and coordinating all the logistics of parking, aid stations, start/finish, etc.  Also, consider what often goes into putting on an ultra marathon the week before the event:

lack of sleep for multiple days before race
lists to remind you to make lists
running most of the course with course marking supplies
meal planning, shopping, and organizing for post race
hiking in aid station supplies (James alone carried 6 gallons in one trip a mile to the last aid station)
driving on sketchy roads to get to where you hike in the aid station supplies
coordinating a multitude of volunteers
clean up after the race, including getting all aid station trash, tents, and supplies off the trails
sending out final emails to racers, respond to emails/calls from racers
getting race results up in a timely manner

There is so much more, this is just a handful of things a race director does in the few days before the race and after.  Some jobs associated with directing take weeks or months, and some can only be done a day or two before a race.  Directing a race is harder than running it, guaranteed.  I traveled to the gorge in Oregon near Cascade Locks to help James with the first annual Gorge Waterfalls 50K.  My duty? Do whatever he needed from Thursday through Sunday.  The race took place on Saturday.
We marked about 8-9 miles of the course on Friday morning and met with a park ranger to discuss the race and pick up keys for the park gates.  What's more, there were a few more requests from the rangers: put up more signs to warn hikers about the race.  Friday also included shopping, setting up aid stations, computer work, volunteer coordinating, and hiking trails at night to show volunteer coordinator William how some of the volunteers would be stationed and to lug water to the last aid station.
The Race
Saturday's race was a big success, runners absolutely loved the waterfalls, the mossy forests, and the single track trails.  Overall, racers reported that the race was both harder than they expected with a lot of smallish rocks in the trail, and more beautiful than expected.  I was stationed at two points on the course to take pictures and video of the race.  It rained the whole time I was on the course, from 7:30am to noon, but it was a little drizzle most of the time, making it bearable.
My favorite section was photographing and recording Elowah Falls.  The waterfall was so strong, plummeting water into a shallow pool, that it relentlessly sent thick mists of water over the trail and bridge as far as 300 feet from its source.  I stationed myself on a car sized boulder and captured runners as they passed over the bridge and past the falls.  The spray from the falls was so intense that I had to clean my lens between runners, sometimes multiple times.  Some of the photos turned out a little blurry due to the spray, but there was no avoiding it, especially when a gust would fling a wave of mist my way.  After 45 minutes of this, I was ready put on some dry clothes.
Here is my favorite video I took at Elowah, it gives you an idea of the power of the falls: 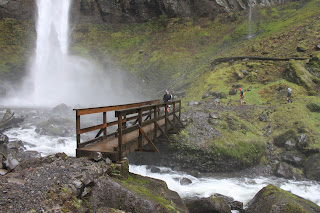 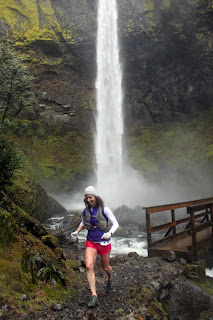 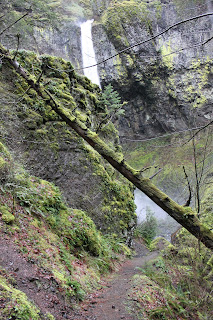 Pictures from 2.5 miles into the course, not sure of the name of the falls: 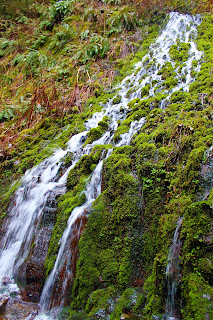