I am the water and the fish

People seem to enjoy watching me swim.  At least that's what they tell me.  I float like a fish on the surface and glide quickly through the water.  Up to this point you have probably been wondering why my blog is called Run Eat Swim.  No, not because I do triathlons, but rather because I love swimming.  Like most people I swam as a kid, in the lake and in the pool.  Swimming was a side effect of playing with the other kids rather than the purpose of getting in the water.  I certainly never did laps back then.

In high school I was an unusually exercise-motivated kid.  I ran in track and cross country and in my spare time I liked to run in the woods or bike what I called the killer lollipop.  It was a out and back with a loop at the end that hit up all the big hills, all on the road, with me on my mountain bike.  I'd swim at the local athletic club in the evenings.  Most of the time I'd go swimming after dinner and come home and do my homework.  I taught myself to do the crawl (freestyle) by watching other swimmers and before my fist month of swimming was done, I was doing a mile at a time.  Learning the flip turn took a little longer, but I also figured that one out.  Swimming was a moving meditation for me.

I began swimming a full 10 years later when some of my friends began training for a local sprint triathlon.  We would meet early in the morning in the summer and swim across Goss Lake or around it, doing anywhere from 1/2 mile to 1 mile.  The mornings were chilly and the water was cold, but we were brave, motivated ladies.  I would often run the 5 miles to the lake then swim and run home.  My friends usually had a bicycle route planned for post swim and I'd chase after them for a mile or so.  I began swimming by myself when I couldn't sync my schedule with my friends.  It was a bit scary to swim in a deep, dark lake on a cold morning or evening, but the pool really doesn't even compare to the lake's luscious, cool feeling water.

For the past year (yes, it's been a whole year!), I have been swimming anywhere from 1 to 4 days at the pool.  There have been weeks where I didn't make it to the pool at all, especially this past August and September when I was super busy running.  Lately, I have been swimming at the pool 2 times a week which is perfect.  I'd love to make it 3 days, but there are just too many things I enjoy doing.  I am balancing my running with the swimming and my own version or core/power yoga/calisthenics that I call yogandice.  I'll post about that another time (soon, hopefully).

Today I was swimming in the pool, doing a long swim workout where I just continuously swim freestyle for 90 minutes.  My ultra swimming workout.  I can do a mile in a half hour, or roughly 15 minutes per 1/2 mile.  Today I realized that I have come a long, long way since those evenings in high school.   It wasn't until last spring, 6 months after swimming regularly, that I began to have the sensation of floating on the surface of the water.  No sinking legs or hips!  It is an incredible feeling!  I feel like a fish: I watch my bubbles surfacing, remind myself to keep my neck aligned with my spine, spear my arms into the water, and create as little drag as possible.

The idea of streamlining your swimming (no thrashing ladies and gents) comes from the swimming technique called Total Immersion (TI).  I began studying TI Januuary/February 2010.  It changed my frantic style of swimming that was based on sprinting for as long as I could sustain to cruising like a fish in the water: fast and relaxed.  The premise behind TI is that people generally work too hard when they are swimming, they slap the water with their hands and violently kick the water with their feet.  They feel like they are sinking and create a large volume of bubbles.  The more bubbles, the more drag.  To ameliorate this, TI teaches swimmers techniques that use the least amount of energy, allowing them to swim long distances comfortably or enjoy themselves more while swimming shorter distances.  The techniques help swimmers better their swimming form in the water including refining their flip turns. 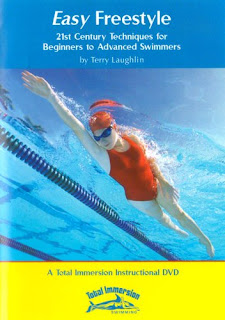