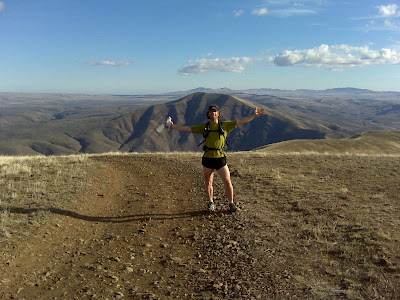 I thought doing one 50K in a weekend was tough and intimidating, but somehow the idea of doing two 50K's was pretty exciting.  Yes, this is the kind of thing that excites me!  I love a good challenge, and boy oh boy was this to be a challenge, especially the Yakima Skyline Rim 50K on Sunday.  Doing two 50Ks also meant that I'd do more than 90 miles of running in one week, a new personal record.  The main reason I have never done so many miles in a week is mostly the sheer amount of time it takes, it's a part-time job!

The weekend went like this: Saturday in North Bend James and I ran to the Goldmyer Hot Springs and in the process got 12 miles off course, making our total mileage for Saturday a whopping 34 miles.  Sunday we ran the future race course for James' Yakima Skyline Rim 50K (31 miles). The race will be April 3, 2011.

The two days couldn't have been more different in terrain and weather.  Whereas North Bend was wet, cold and overcast, Yakima Skyline was sunny with a mostly warm strong breeze (until nightfall when it got freaking cold!).  If I had to run Sunday in the rain like we did Saturday I think it would have been torture and I would have been a whining mess, and I am not much of a complainer.  Instead, I enjoyed the warm sun on my body, a feeling that I missed so much coming from Western Washington.

Yakima Skyline Rim 50K
The Yakima Rim course is an out-and-back run.  It consists of two major climbs (3 descents) on the "out" portion of the course, and three major climbs  (2 descents) on the return.  Each way is approximately 15.5 miles and the elevation gain is a whopping 10,000 feet!  This is the roughest and likely the toughest 50K I have done.  It feels like the course is either up or down, almost the entire 31 miles.  Several steep sections of the trail are riddled with loose rocks that threaten to trip you up if you take your eyes off the trail to admire the incredible views.  A great 50K for runners who love the "adventure" part of trail running.  The sunshine and treeless terrain is refreshing after months of running in the evergreens.  I loved being able to see where I was going and where I had come from, smelling the windswept sagebrush, and feeling the sun on my face.

James asked me on the way back portion of the 50K after we had experienced the many challenges of the trail, "Are runners going to like this course?" Ummm.  Hmmm.  If they want a challenge, not a "time".  If they are running to experience the trail and the beauty of nature in whatever way it expresses itself- wind, dry desert scents, striking geology of  the Yakima rim.  If they enjoy burning legs and technical terrain....  then a big YES!

James and I started the run at noon, much later than we had hoped, partly due to sleeping in and partly due to a dead car battery.  This meant that we would be running the second half of the 50K in the dark, something I don't really like to do.  As we reached our water stash at the turnaround spot, the sun was setting and we still had 15 miles and 3 major climbs (and more significantly two major descents, which are more difficult than the ascents in the dark) to get back to our car. All of this on tired legs from the previous day's 50K.  What an incredible challenge and confidence builder.

I like to challenge myself on my fun runs.  Even if it's only an eight mile road loop, I can find ways to push myself.  But this particular 50K challenged me in some new ways.  I really had to work on staying in the moment.  My mind kept jumping to: I just want to be done!  And then I would remind myself to enjoy what I was doing.

This was especially difficult on the return to the car in the dark and cold with minimal clothing, a hungry stomach, tired legs and very little water.  I actually ran out of water a few hours from the car and kept expecting that I would feel horrible or suffer from dehydration or....or....or.... It was a good opportunity to refocus on the present.  It's amazing how my preconceived ideas about my need for water kept putting me in fear, when in reality I was fine, albeit a bit thirsty upon arriving at the car.  On that note, I am going to try to assume the best rather than the worst in challenging situations.

Here are some pictures from the Yakima Skyline Rim Trail 50K: 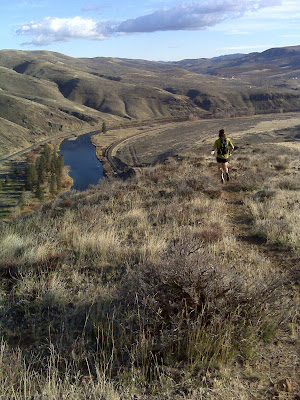 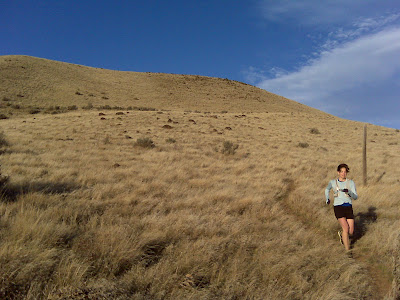 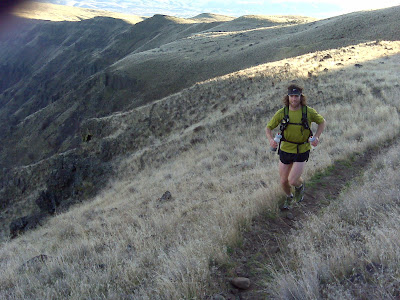 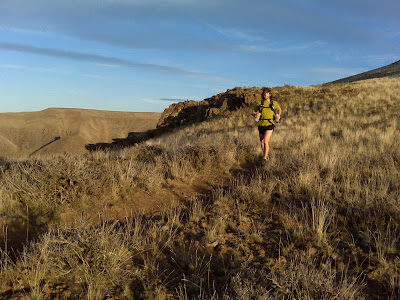