When Adventure Goes Wrong: Fastpacking in the Cascades

Getting permits for a 200 mile trail running event that goes point to point is not an experience I'd wish on my worst enemy... however, there are many times when the planning and permitting process can be fun. Generally this means I have to go out and "check out the trails/roads/aid locations" to make sure they will fit the needs of the event That usually means planning a fastpacking trip, a multi day adventure in the mountains. This trip was really into the unknown, as I wouldn't be out there checking it out if I had all the information in the first place.

Which brings me to my latest fastacking trip. I only had about 70-100 miles to cover, about 35 of those miles were needed just so I could get back to my car. I had to decide whether I would do an out & back or a big loop, almost half of which was unnecessary for mapping purposes but necessary for returning to my car. I decided on a loop as I really dislike out and backs. I'd rather see new terrain if possible, even when it wouldn't be part of the race course.

Meetings with the Forest Service went well, but that night my new-to-me Honda Element suddenly became impossible to shift into gear high on a mountain and I did all I could to get it back to town so I could have a mechanic look at it the next morning. That pushed my trip out a day. The mechanic was able to bleed air out of the system and - fingers crossed - I haven't had trouble since them! 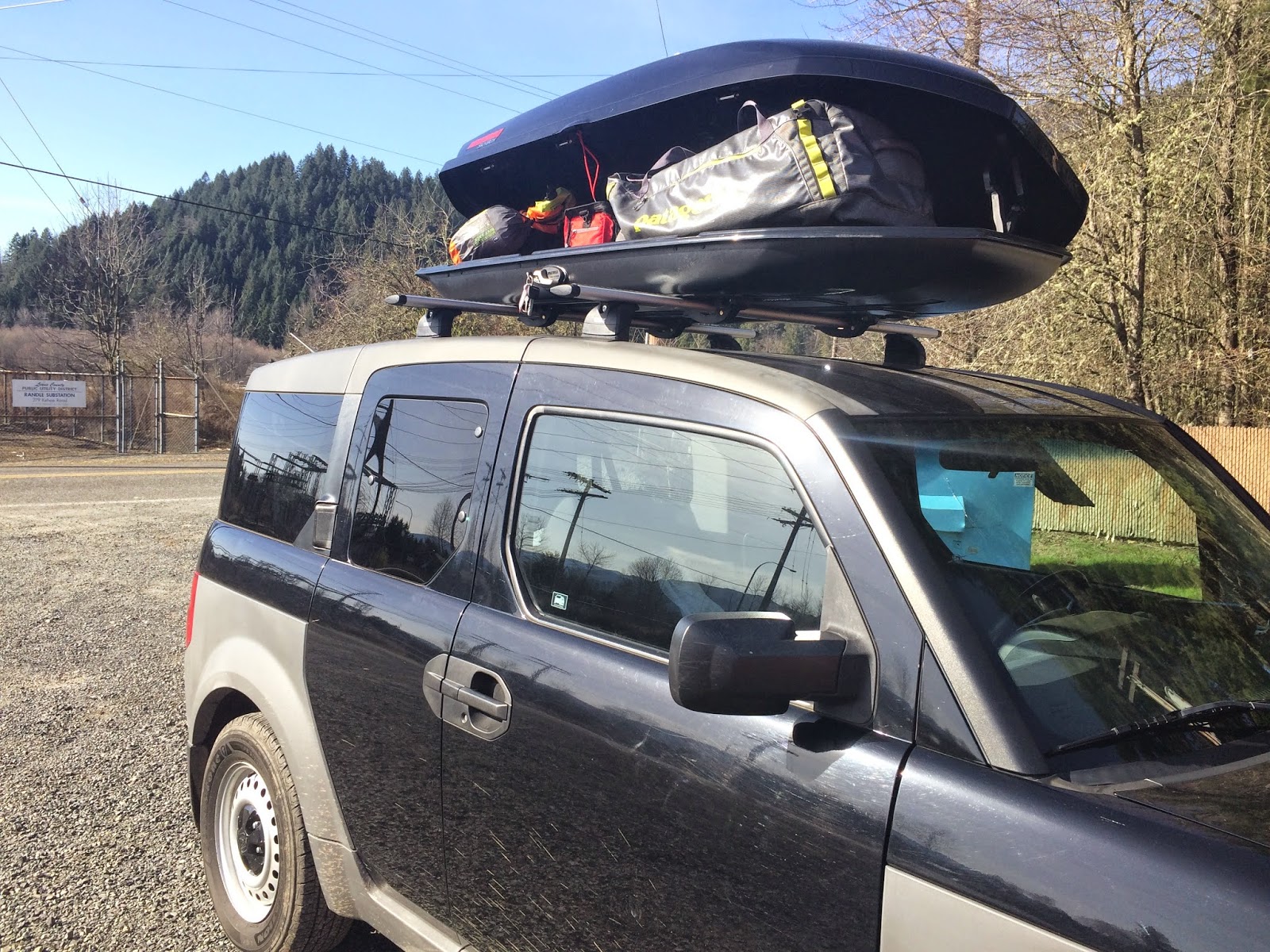 I used the rest of the day to organize my gear in the city of Randle at a hometown cafe parking lot. Besides some strange looks, one weathered woman smoking a cig and havng trouble getting phone reception, asked what I was doing. After telling her about my "backpacking" trip (I called it backpacking to simplify my usual explanation) she asked, "Who are you going with?"

She looked surprised and impressed and said, "You must be married!" I think she was trying to say that a girl who does these kinds of adventures would be desirable, although I'm not entirely sure what she meant.

"No, I'm not," I said, "Actually that's probably why I'm not married!" Afterall, when you are travelling all the time and you enjoy doing trips solo, or in other words, are rather independent like myself, there's not huge motivation to make relationship kinds of commitments. I'd also have to find someone who could keep up with all my endeavors. I think there's enough material on this subject for it's own blog post, so I've leave it at that for now. 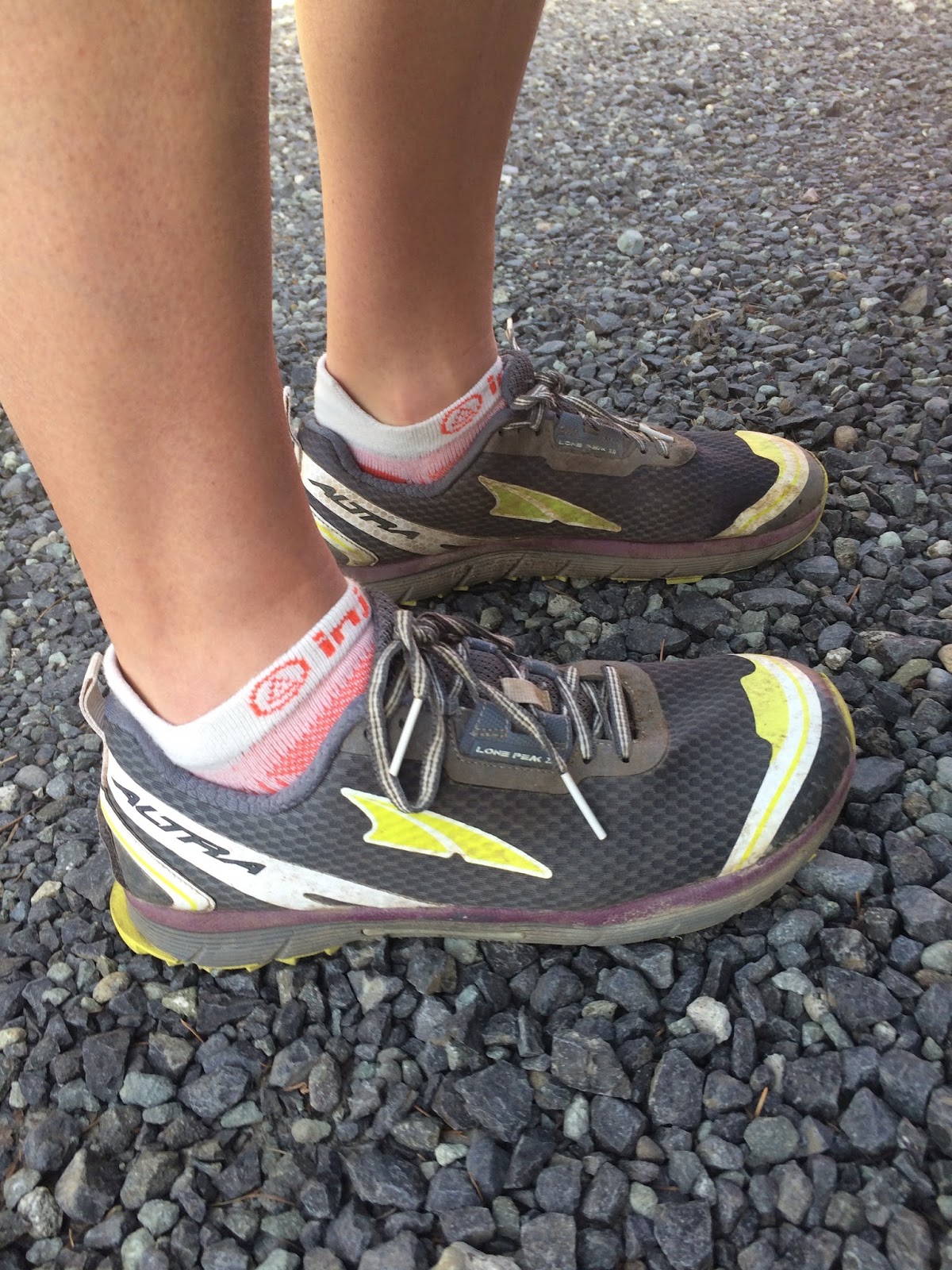 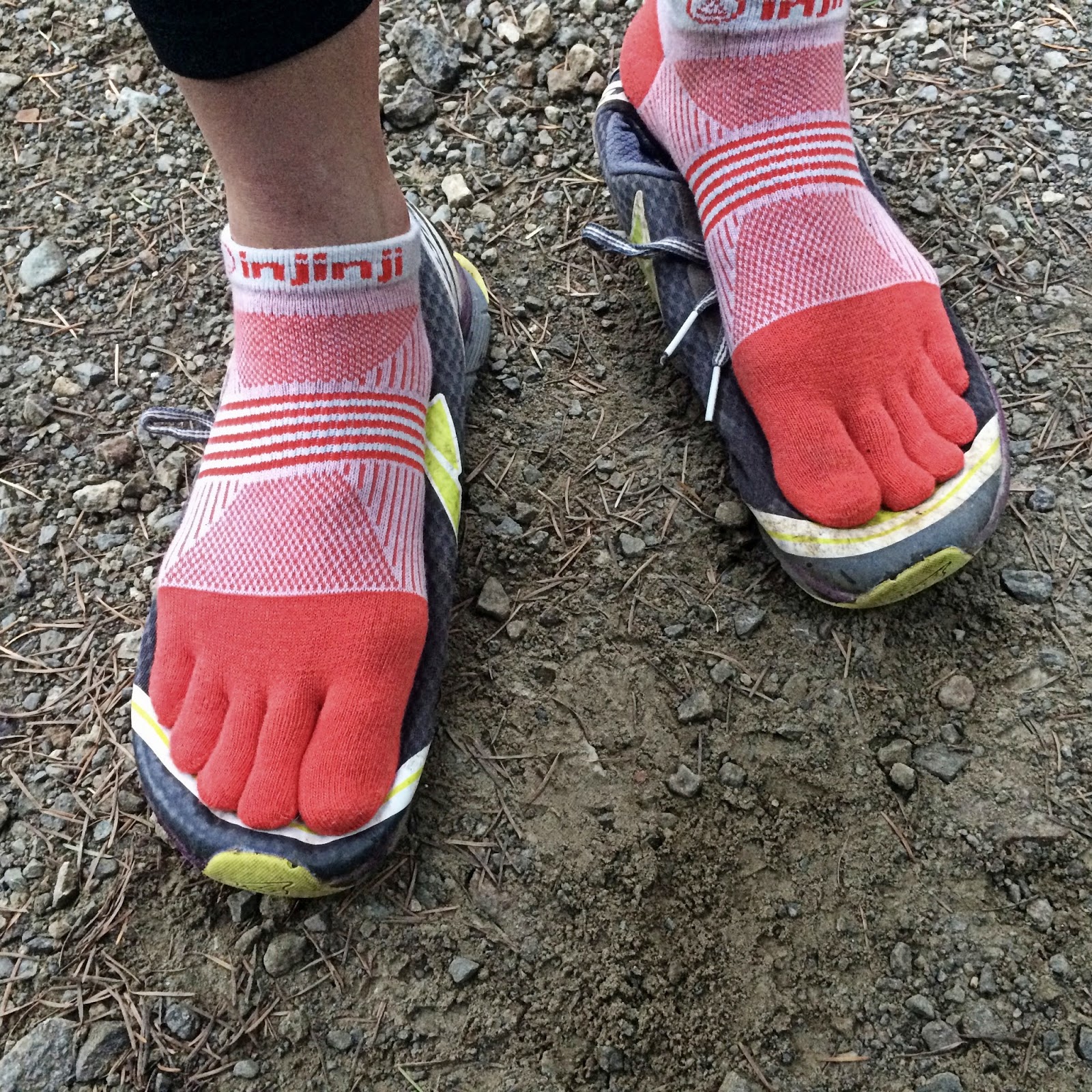 Altra Shoes (Lone Peak 2 pictured here) are great for hiking/fastpacking/ and running. I added Icespikes to them for traction. It's also a good idea to bring gels (I use vfuel), even if you are mostly going to eat solid foods as they can give you quick easy to digest energy when you need it fast. If you plan to race using gels, you will also want to use them in training, so I bring them along and use them for training and emergencies.

The next morning before the sun rose with a layer of ice over all my car windows from sleeping inside it. I had taken out the back seats so that when I traveled I could sleep in it much like a van. I was up and making coffee with my jetboil and single pour cup as the sun slowly lit up the frosty mountain tops all around. A quick stop at the local gas station for ice for the food I'd be leaving in my cooler for several days and I was off driving my Element up Forest Service roads to the start of my adventure. I took Rd 2304 to find a trail I really hoped was there the 7 / 7A trail.

The 7/7A trail traverses mountain peaks North of Mt. Adams and goes South from Randle, WA almost all the way to the Goat Rocks Wilderness and Mt. Adams. It runs along a ridgeline with views of some of WA's & OR's biggest mountains: Mt. Rainier, Mt. Adams, Mt. Hood, Mt. St. Helens, and Glacier Peak. I was pretty excited to check it out but worried as my contact, Jack, at the Forest Service in Randle told me it has been unmaintained for several years and as a "hiking only" trail, it wouldn't be getting much use. He stressed that I might be climbing over downed trees the entire way or that the trail could be overgrown to the point of not being able to follow it or both!

I barely got up Rd. 2304 when I had to park and begin my fastpacking. the road had been washed out by Owen's Creek in two spots and there was no way my low clearance Element was going to make it over. My pack felt very heavy and I hoped the climbs wouldn't be too intense with all that weight on my back. Rd 2304 became a trail quite quickly and had a good number of trees down, nothing too overwhelming but enough to make me take note so we could go in later and chop them off the trail.

The Road (now a trail) became faint at times and then would open up and clearly be a trail, other times I was sure that it was about to peter out... As the trail began climbing toward Pompey Peak it was easier to follow, but still had trees I had to climb over, a lot more work when carrying 3 days of food and gear! At the base of Pompey Peak I took the trail to the peak and WOW OH WOW! What a view!! See photos: 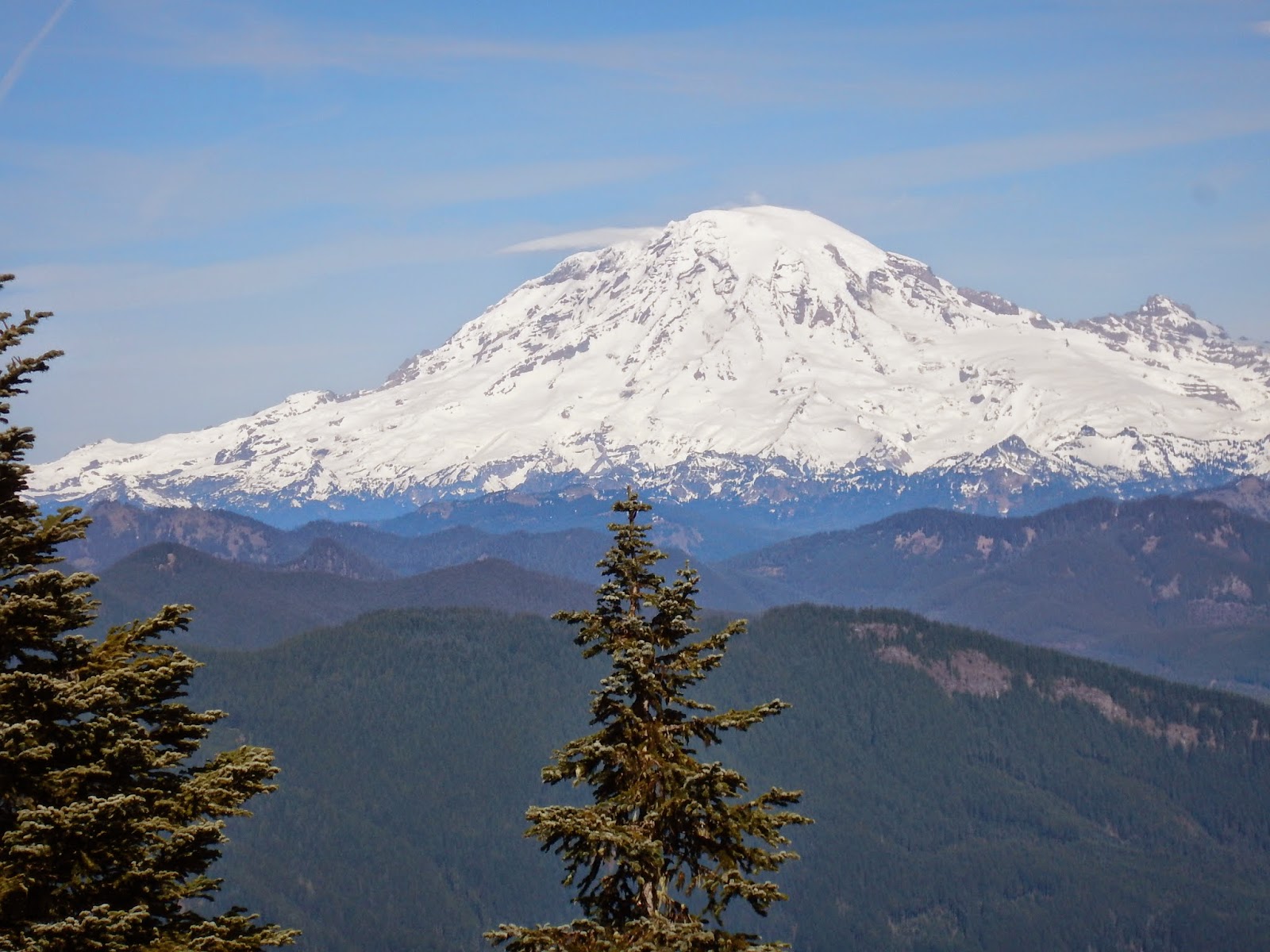 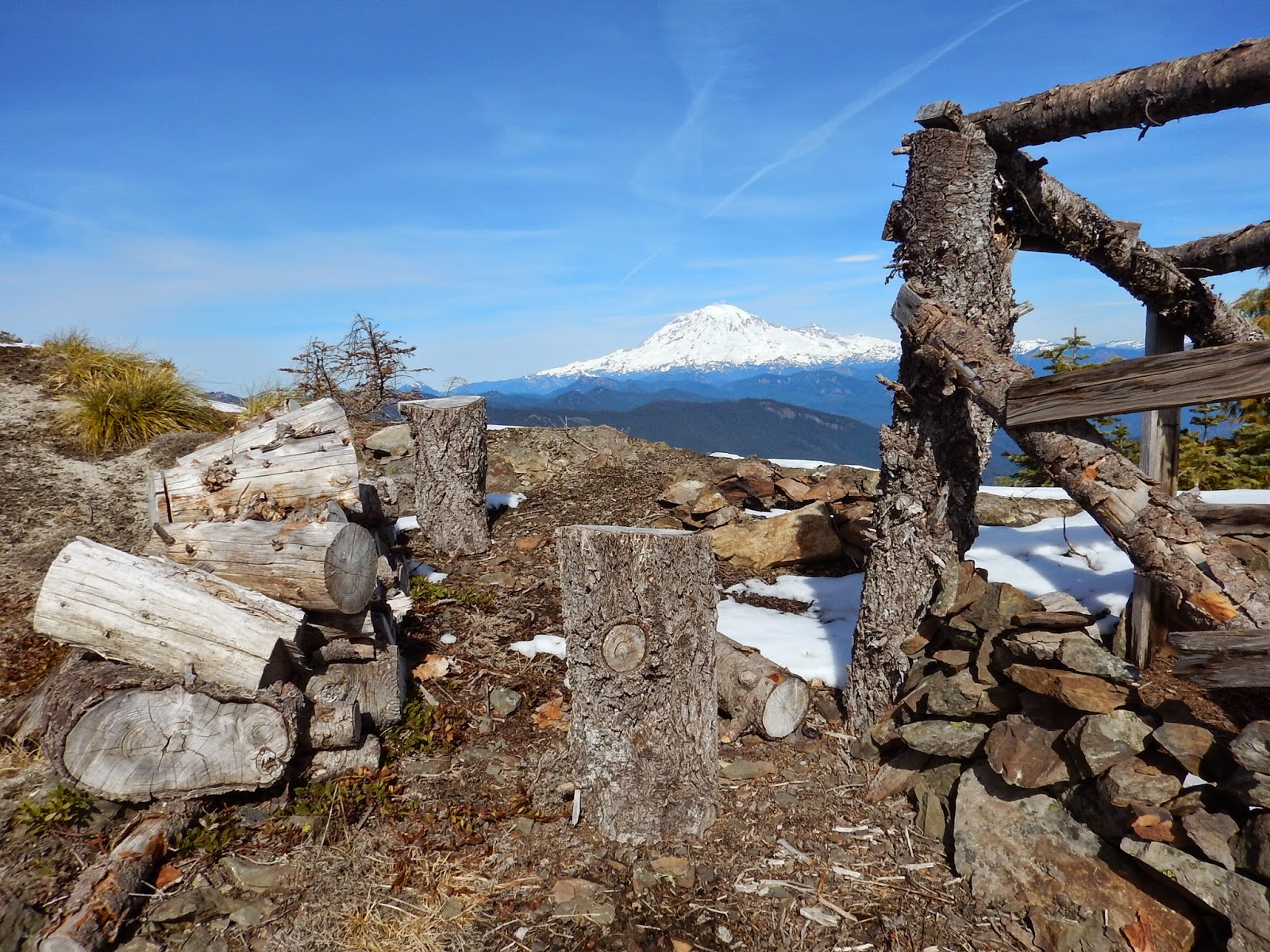 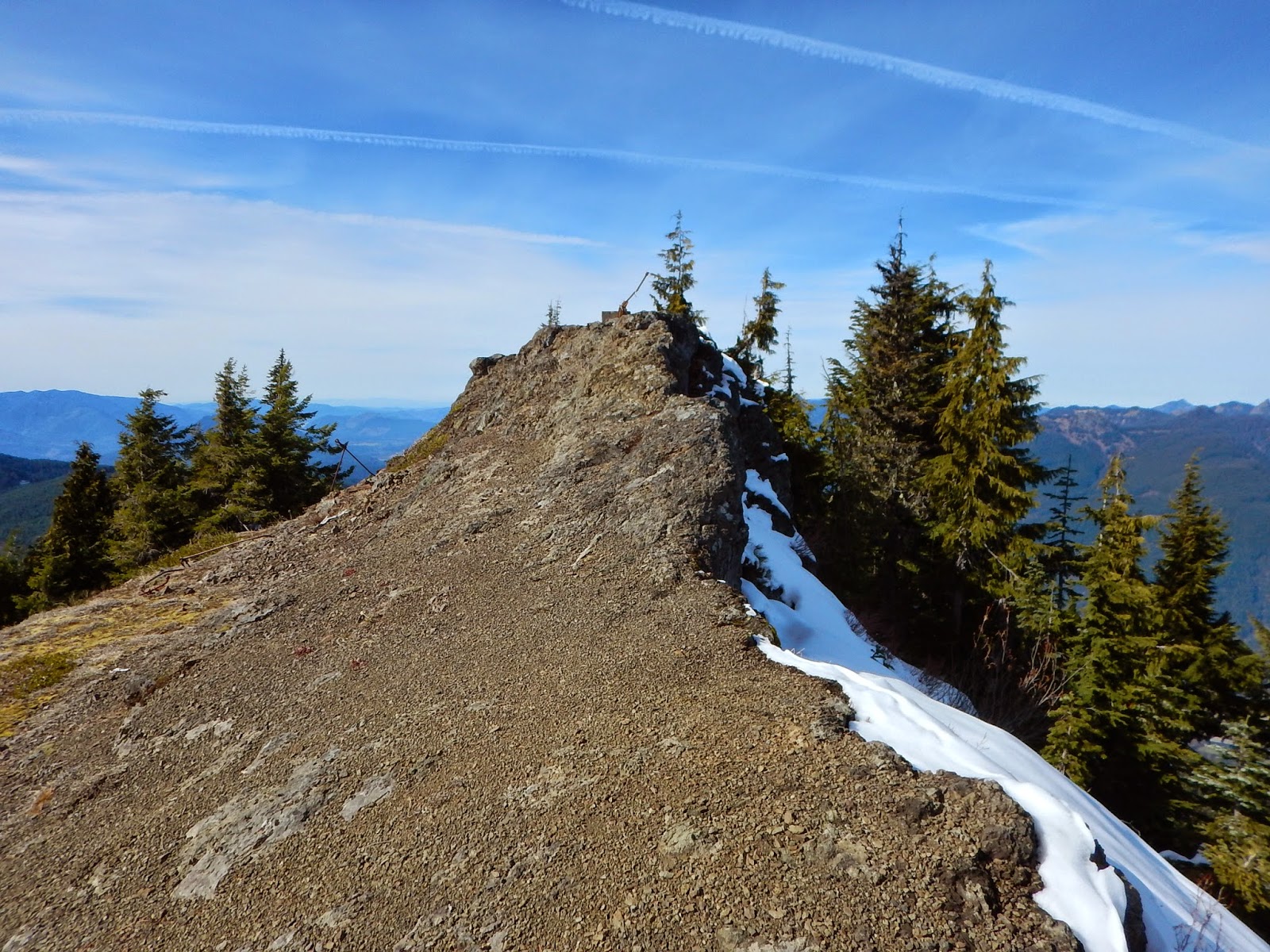 It was at Pompey Peak where I began to hit snow. A lot of snow. In fact the farther South I went from Pompey Peak, the deeper the snow became and the harder it was to follow the trail. There was no trail, just 10-20 feet of snow that at times would get down to about 5 feet but I was left relying on my Garmin 64st GPS to follow where the path was.
The GPS kept me close to the trail but it was near impossible to find the actual trail and I weaved in and out of trees, up and down the hillside, watching my GPS constantly. 4 miles into this intense and overwhelmingly difficult snow traversing, I ended up on a cliff side under an unnamed peak. I'd fallen in numerous tree wells and this was pushing me past my comfort. Then, my GPS screen went blue. Nothing.

I go with the rule of 3. Sometimes it's 4, but at some point on an adventure, when things keep going wrong, you have to say enough is enough and get to safety. I was at about 3, when I decided to call it a day. If you keep going when things go wrong, you can get so deep in trouble that there's no coming out without severe consequences. It's a lot better to be able to say, "I don't know what would have happened," then, "Something really bad happened."

Without a GPS or a trail and a bad feeling about the whole thing and with night time quickly approaching, I had to make  a hard decision. I decided to turn back. I had confirmed that the trail existed enough that I wouldn't leave totally empty handed, but it was still disappointing. I would have to wait for some of the snow to melt to get the entire GPS track, but that was a lot better than getting hurt, lost, or even die in the mountains with no one knowing where I was. Now, the challenge was to follow my tracks back to my car, and try to do it all in one day.

It was a lot faster going back than it was on the way out. My tracks were still all there and although they were weaving around like a drunk (I'd been following the GPS which makes for a lot of side to side travel trying to stay on the track) I was able to cut out some of my unnecessary trekking knowing which direction I had come from.

I got back to my car after 12 hrs and only 28 miles! The combination of a heavy pack, lots of snow and down trees slowed me down to just over 2 mph. The out and back had 6,500 feet of climbing, not too shabby for a ridgeline traverse!
Fastpacking Packs
I highly recommend the Ultimate Direction Fastpack 20 or 30. I you have to carry lots of gear - tent/cold weather clothes/stove you might consider a pack with a frame and waist belt, however these two packs will help you travel light and fast and ride well enough to run even with a lot of gear. If you weigh yourself down with lots of gear, you will move much slower and these packs hkeep you tot the essentials. 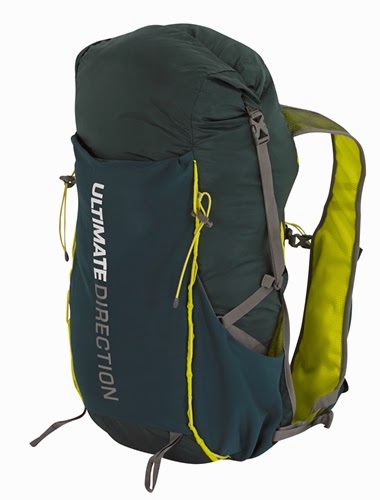 Want More?
For more daily fitness ideas, inspiration, and humor, check out my Facebook Page
Yoga based core and strength exercises on my YouTube Channel
A little crazy on Instagram
Short, sweet and sassy on Twitter
Entertaining 5 million at a time on Google+