I had a pretty magical weekend. I experienced the gift of seeing an amazing place through the eyes of a 6 and 3 year old.  Everything was so raw, present, and new.  I spent the weekend on the Olympic peninsula with my girls.  We got an early start Saturday morning and caught the Port Townsend Ferry, stopping to do some food shopping for the trip.  We also stopped in Port Angeles to do some Rainshadow Running Propagandice: I dropped off fliers for the trail races at the two outdoor/running stores in town.  Then we hit the road and drove the 2 1/2 hours to Lake Ozette, which is about 3 miles from the coast. We checked in at the Lost Resort, where we had rented a one room cabin for the night, then I quickly organized our hiking backpacks and grabbed a few coats, as it was already 3:30pm and we still had 3.2 miles to hike to get to the ocean.  I wanted to get there with plenty of time to play on the beach and still make it back to the cabin before dark (7:30pm-ish). 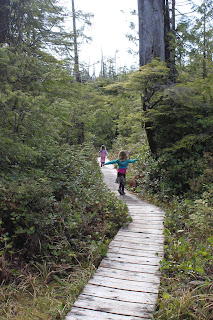 It took us 1 hour 30 minutes to hike to the beach. About halfway there we could hear the crashing of the waves, the melodic sounds inspired us to continue onward and reminded us how close we were getting.  Keep in mind that 3 miles for a 3 and 6 year old is like, oh, a third of their lifetime!  Three miles to them is the equivalent of an ultra marathon to me.  Little Stella hiked all the way to the beach, despite my offerings of a ride in the backpack.  By the time she reached the beach, she was beyond excited, exclaiming over and over when she caught sight of the ocean, "We did it, we did it!"  She was so excited to see the water that she ran ahead eagerly and aggressively anytime the trail turned from wood planks to gravel or dirt.  Most of the trail was an elevated wood plank trail.  Nice kind of trail you'd think, except that we were hiking it in March and it was super slippery.  Stella fell innumerable times, despite my warnings: "Walk!  It's slippery!  If it looks wet you should be walking."  Marina fell, I fell.  Yes, it was very slippery.  One time was holding on to Stella's hand and I slipped.  Without thinking I used her as leverage to keep from falling on my face.  Luckily we all stayed upright. 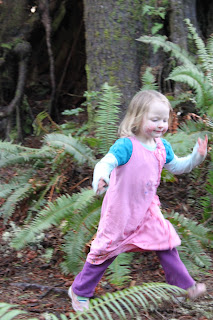 You can imagine that when the trail turned to nice, solid soil Stella was out of sight.  She was set on beating us to the ocean, little arms beating at her sides, legs circling the ground.  That girl is tough.  3 miles for a three year old is pretty darn good.  I captured a super cute video of her exclaiming, "We did it!  We did it!" over and over as she ran toward the ocean.  She was a good 50 feet ahead of me, so I couldn't see her, but I could hear her voice, unusually high pitched from the excitement. Here's the little video I took of the kids meeting the ocean: 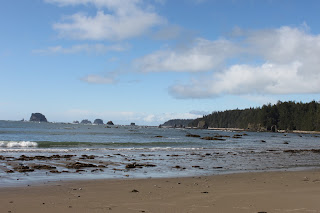 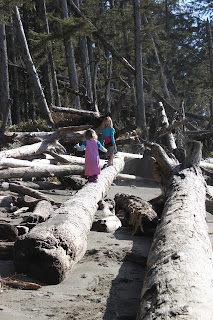 From the beach trail head, we hiked to a grass covered rock that towered above the beach.  It had a steep, treacherous trail leading to the top and I had to all but hold Marina back to keep her from going up alone.  I ended up folllowing her, holding Stella on one arm and grasping the trail with the other arm to keep myself on the rock.  The views from the rock were incredible!  And I began to plan my return trip, where I would run the loop from Lake Ozette to Sand Point then North to Cape Alava and back to Lake Ozette (9miles) then add in a run around the lake, another 9 miles or so... for now walking would have to do.  Plus, we had more exploring on this beautiful sunny afternoon. The thought passed through my mind that perhaps I was being a bit irresponsible as we three scaled down the rock to get back to the beach.  I was able to help one girl down at a time, safely.  We found a rope tied to an overhanging log that served as a great gymnastic toy until Marina smacked Stella in the face with it (by mistake of course).  By then we had discovered a teeter-totter log.  Marina was able to give me a pretty good shake while I sat on it.  We made it into a balance beam and I walked on it while Marina rocked it ferociously.  I'm definitely revisiting that log!  Super fun!

By this point it in the hike it was going on 6 PM and Stella's feet were cold so we headed back to our backpacks by the trail head, fueled up on snacks for the 90 minute hike back and set off.  I kept the girls entertained on the way home by telling outrageous stories of athletic adventures including the story of the man who cut off his own arm to get free from a tree, the ice climbers who went through unimaginable tribulations to get off the mountain, and stories from James' Hardrock 100 and Plain 100 mile races.  Marina's legs were aching and she really connected with the idea that "we can always do more and go farther than we think we can."
All in all, Marina hiked all 6.4 miles and Stella hiked 3 miles.  Interesting numbers considering their ages!  We returned to the cabin to make a fire outside and eat cold sandwiches, and for the adult, a few beers.  As the cabin had no TV, internet, or cell service, (I know what kind of uncivilized place were we staying?!?) we read some long stories and I tucked the girls in for bed.
Sunday we made a stop at the newly reopened for the spring/summer season Sol Duc Hot Springs.  What a cool place!  I'm not sure what I liked more: the hot springs or the people watching.  There were a large number of foreign visitors speaking other languages.  Unfortunately, I was resigned to the kiddy pool with my 3 year old, who I was disheartened to learn, could only go in the small pool (99F) due to her age.  Apparently you have to be 4 years old and up to be in the 101F and 104F pools.  Surprisingly, we stayed plenty warm anyway and it probably wasn't too bad either considering that Marina was pretty intimidated by the people in the hotter pools.  For some reason, our little kiddy pool was populated by friendly and fat old ladies who were happily socializing and the warmer, deeper pool was populated almost exclusively by men.  So the girls were happy to stay in the kiddy pool with the friendly ladies.

Sunday was capped off by a lovely visit to my sister and bro-in-law who live in Port Townsend.  They are expecting their second child in a few months.  Per their recommendation we tried out a really sweet Indian restaurant, Muskan Indian Restaurant, before we caught the ferry home.  I highly recommend it! 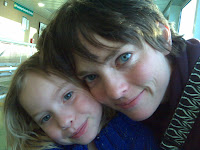 I really want to go back and run the trails and areas I explored last weekend.  I think I could come up with a great 20-30 mile run there, then make my way to the hot springs.....and Indian food.....

Some more pics from the trip: 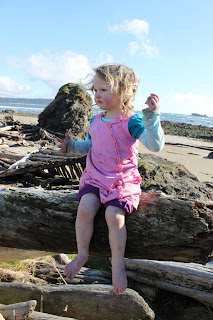 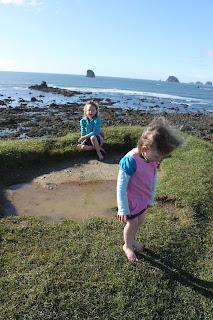 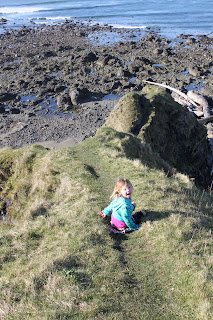