I was starting to feel antsy.  It doesn't take long.  Sometimes it's a few days, sometimes a few weeks, but rarely longer than that.  It was time to get out into the mountains, or in this case out in the hills and run to exhaustion.  I planned a 31 miler at Bellingham's Chuckanut Mountain for Monday the 3rd of January.  It was an easy choice to do the Chuckanut 50K course, which starts at Fairhaven park and follows the interurban trail for 6.5 miles before climbing to Fragrance Lake.  The course then heads toward Cleater Road.  Cleater, oh Cleater how I love to hate you!  Cleater is a 3 mile gravel/hard pack road that starts at Chuckanut Drive and climbs all the way up the mountain.  The 50K course follows the road until just before the top of the mountain when it angles off to Chuckanut Ridge Trail: a technical trail that pays back the weary runners who braved the climb with stunning views.  Runners are rewarded by views of Mt. Baker, the Cascade Mountain Range, treacherous but awesome views into the valley, and the city of Bellingham.  I was lucky enough to run the course on a Monday, a perfectly clear but chilly day.
Snow covered much of the road as I ran up Cleater.  The Ridge trail was equally snowy with some icy spots.  After the ridge trail, you take Dan's Traverse to Lost Lake Trail.   At the "Y" you head to the right toward Fragrance Lake.  This section is the part that is usually muddy and wet.  What a pleasure it was today!  The chilly temperatures froze the ground, covering the trail with at times a sheet of ice and at other times a 1" layer of snow.  At one point, I was so awe-struck by the trail that I cried out in pleasure on seeing leg-size icicles that formed on the rocks above me like giant teeth.

Spending all day outdoors and in the mountains running is incredibly therapeutic.  The trail has taught me many things, and today it rewarded my efforts with the most magnificent icicles I have ever seen.  I could have retreated into my head and been oblivious to the magic around me, but the moment before I saw the icicles I remember thinking what fun the trail was and enjoying the flow of my pace, my breathing, and my body.  I would have been perfectly happy enjoying that moment, and then I ran right into the winter magic that was Chuckanut!  All over the ground and rocks were frozen ice sculptures that appeared to have defied gravity and frozen in mid-air tracing the curves of fallen branches and looking like a frozen raging sea.
The trail continues to "Chinscraper" a <1 mile section of very steep trail that take you back up to the top of Chuckanut Mountain.  After I climbed the first two steep sections (one more to go) I began feeling really messed up.  My eyes were zooming in and out a bit and my brain was dragging.  Darn, I would have to take some energy gels after all.  I had survived the first 20 miles on a banana and a few Lara bars, but it was time to get some fast sugar.  Wow, those two clif shots were better than I remember gels being, and super sweet tasting!  That's what happens when you starve yourself of sugars, on a cold day no less.  After the nice sugar boost I easy finished the climb and began descending Cleater Road.  I was ready to take on the last 10 miles of the course, feeling impatient to get to the interurban trail, at which point I would have 6. 5 relatively (ha!) flat miles back to Fairhaven Park.
My heel really began to hurt on the descent to the Interurban.  I thought for a bit that maybe it would be wise to hitch a ride to my car when I got to Larrabee State Park, but it was only a fleeting thought as I was set on running the entire course.  I slowed my pace and within a few miles the pain had diminished enough for me to take my mind off of it.  I began to feel some tightness in my underfoot as well as the heel.  My heel continued to be sore, tender and at times painful the rest of the run, but I was able to speed through the last 6.5 miles with the energy I saved for that section.  Having run this course before, I knew to save a little so I could make a strong push to the finish.  The last 6 miles can be heaven or hell. I finished the run just after the sun had set, happily worn out and ready to enjoy the car ride home, exhausted. 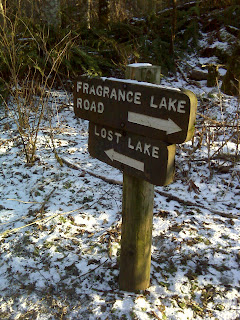 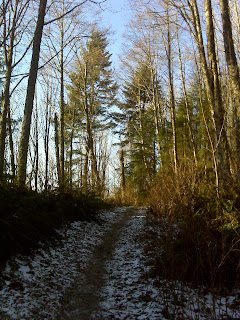 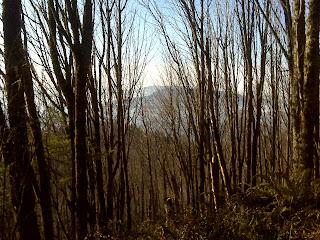