Mr. Rainshadow and I spent last weekend on the lovely Orcas Island.  It seemed like everywhere we went there were magnificent views: ocean, San Juan Islands, lakes, forests.  Orcas is a special place, like a miniature Whidbey Island without Oak Harbor's Walmart, Kmart, Home Depot, and McDonald's sprawl.  It was James' and my last weekend together before he left for the East Coast on a mapping and family visiting trip.  We planned to run James' Orcas Island 50K course on Saturday, which he had never run in one go.

Saturday was the perfect sunny day for us to run the 50K course.  We started at 9 AM and ran most of the day.  There were a number of trees down, but mostly just a lot of small branches and pine needles.  Apparently there have been some good wind storms on the island already this winter.  As we climbed up toward Mt. Constitution, patchy snow began to appear and the temperatures dropped.  I ended up wearing my jacket the whole second half of the run.  James was sweet enough to let me wear his jacket too when we got up to the top of Mt. Constitution and I hit a wall: I was very cold and feeling out-of-body.  It took several miles to warm up again and lose the jello feeling in my legs.
It is not unusual to have some mental and physical battles on a long run.  And for some reason I had my fair share on this day.  As James and I were approaching mile 11 at Camp Moran I tripped over a root and barely missed smashing my face into the ground.  I didn't get my arms underneath me as I fell, so I threw my head back as I hit the ground to avoid hitting my face.  I heard my neck crack, and I thought, uh oh!  Strangely, nothing hurt (more than you'd expect), but I got  little headache for about 20 minutes.  That was the first fall.  And I almost never fall.  Second time was about 26 miles into the run.  Going down a hill I twisted my ankle and fell at the same time.  After 30 seconds I was sure my ankle was fine, just mildly overstretched.  Lucky day!
We stayed at Doe Bay Resort and enjoyed their mineral hot tubs on Saturday night after the run and Sunday morning.  They also have a great restaurant at the resort that features local and seasonal foods, with a mostly vegetarian menu.
On Sunday James and I returned to the mainland and did some t-shirt shopping for the Orcas race in February.  Every year James buys the right number of shirts in people's specified sizes at thrift stores and has the Orcas race logo printed on each one.  The really cool thing is that he picks out not just t-shirts but jackets, vests, long sleeve shirts, sweaters...some pretty funny and some pretty normal.  Racers get to pick out what item of clothing they want in the size they specified on race day.  So we bought about 300 items of clothing in Mt. Vernon then spent the evening sorting them into piles depending on their color and size.

Here are some pictures from our trip: 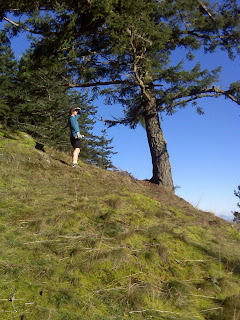 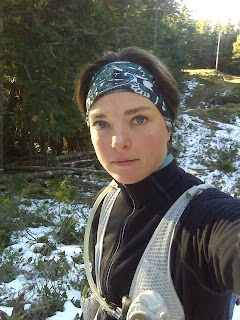 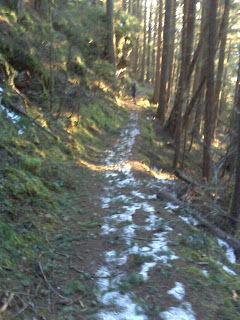