It has taken me a bit longer than usual to get to this post.  White River is an amazing race--the views, physical endurance, mental toughness, the whole experience.  Maybe I needed some extra processing time... 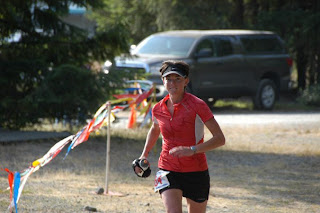 Above, Candice finishing, and the race profile


PRE-RACE & CAMPING
I drove up to Crystal Mountain, near Mt. Rainier the day before the race and camped out near the start of the race at Buck Creek.  The camping is free other than a parking pass ($5) and there were plently of beautiful campsites.  The campground was loud that night!  Luckily I was exhausted and fell asleep easily, not the case for all the runners though.  Apparently we runners were not the only ones at the camp grounds.  Sounded like there was some serious partying!

I went into the race with a mild knee pain that began the week before the race from dancing.  I iced the injury as often as possible including the night before the race in the White River, yup, the race's namesake.

It was a little difficult to get my legs all the way in the water.  It worked though, by the morning of the race I couldn't feel any knee pain!
I drove my new car to the race, what a pleasure to have a small car for road trippin.
Me and the White River
5 AM: TIME TO WAKE UP AND RUN ALL DAY
I woke up for the race feeling really cold and warmed myself up in the car, heat blasting enough to change into my minimal running clothes.  Runners were beginning to swarm around the starting line and the bathrooms.  I saw a local runner, Matt Simms and we wished each other good luck.  The White River 50 Mile race is the USATF Trail Running Championships so I was lucky enough to get a peek at the top trail runners-- Anton Krupicka, Dakota Jones, Greg Crother, Scott Jurek, Yassine Diboun, and more.... Krupicka blasted his previous course record like the animal he is finishing in 6 hours 25 minutes.  Beautiful!
Buck Creek Campground, Aid Trucks, in preparation for race day 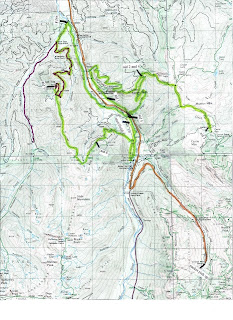 Here is a map of the race (above)

THE START
The start of the race began mellow enough.  No one was in any rush, after all we still had 50 miles to go.  I began running with Barefoot Ted, the very Ted from Christopher McDougall's book Born to Run.  Barefoot Ted ran the race in his Luna sandals and barefoot. I enjoyed hearing about the sandals, his new design for the Leadville 100 mile trail race inspired by the Tarahumara of Mexico's huarache running sandals.

CORRAL PASS and the beginning of PAIN
The race progressed with amazing views as we climbed the first ascent to Corral Pass.  Views of Rainier and incredible mountain meadows full of flowers and butterflies.  It was during the last part of the ascent that we started seeing the front runners passing us on their way back to Ranger creek.  I arrived at Corral Pass aid station feeling great, refueled with ultra running food- potatoes, salt, chips, bananas, coke- and began the climb back down to Ranger Creek and Buck Creek Campground.  My legs really began to ache on the last descent and I kicked some major rocks-ouch, ouch, ouch- and stumbled over some more rocks- ouch, ouch, ouch!  This was where I began to notice foot pain.  It was mild enough to mostly ignore.

HALF-WAY and the beginning of second and last ASCENT
Back at Buck Creek, my girls, Marina and Stella, and my mom greeted me with smiles.  I refueled on more ultra food and rushed off to climb the second ascent to Sun Top, the climb that proved to be the toughest mentally and physically.  Early during the climb my foot really began to hurt.

I tried distracting myself with my hip and knee pain, but the sharp pains radiating all over my foot made me double over every ten steps or so.  F*&k it!  I popped an ibuprofen.  As much as I hoped to avoid taking it, I knew I needed a little help to make it to Sun Top.  I'm sure it takes a lot more than one 200 mg ibuprofen to hurt your kidneys, but all my running friends and facebook friends had advised against any ibuprofen during the race (I had to pose the question in the week leading up to the race).  Which left me feeling a little nervous.
Still feeling fresh, mile 27.  I wore my backpack until Sun Top (Mile 37) where I traded it for my hand water bottle.
MORE PAIN and a little RELIEF
I pushed through the pain for another 45 minutes before feeling relief from the medicine.  Ahhhh, the hip and knee felt so much better!  Unfortunately, my foot did not, but at least now I could cruise more easily.  I lost about an hour dealing with the foot pain as I climbed to Sun Top.  In retrospect, it wasn't too bad to only lose one hour, considering the intensity of the pain.  Could've been a lot worse!

SUN TOP, the last climb
Reaching Sun Top I reveled in the beauty- the incredible views of mountains, the airport (race start and finish) and the big sky.  It was this point in the race I knew I would finish and that felt really good!  The Aid station crew were very enthusiastic and I refueled again in preparation for 6.5 miles down a gravel road, then another 6.5 to the finish on a technical and mostly flat trail.  The gravel road actually lessened my foot pain, I think it was the stable, flat surface.  I started to get excited about reaching the finish line!
Me at the Aid Station #8,  43.4 miles
Bye girls-- see you at the finish!
LAST AID STATION, mile 43.4
At the last Aid Station at 43.4 miles my crew of Marina, Stella, and my mom met me with lots of energy and smiles.  I quickly headed out on the last part of the race, a technical 6.6 mile trail of minor ups and downs.  I began strong, passing quite a few people.  With 3 miles to go I began feeling a little concerned about my eyesight which seemed to be getting worse on the dark trail.  That and a overall delirious feeling, I had to check in with my body a few times to make sure I was good to go.  My foot began really aching on the bumpy trail.  I missed the flat downhill... but I was almost at the end!  The last part of the race climbs a hill to the road that leads to Buck Creek campground.  Recognizing the road I became excited...almost there!!  Right before this point in a 50 mile race, you feel like it will never end, so the road was a relief.

SOME MORE PHOTOS FROM THE TRIP...
White River
Buck Creek, start and finish
Buck Creek Campground and Airport on the right
I even saw a little plane