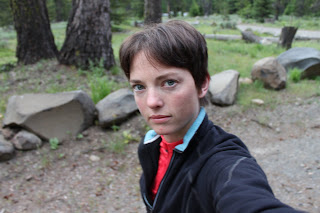 Pre-race, at Tree Phones Campround.  I'm about to shed my jacket and put on my hydration pack!
I had a lot of time during the race to ponder whether Grey Rock is Washington's Toughest 50K as advertised on their website.  My conclusion?  Nope.  Orcas Island 50K was tougher at 7,000 feet elevaton gain and four climbs, one requiring use of hands and feet it was so steep.  Not to say that Grey Rock is easy, nooooo noooo.  It is tough at 6,000 feet elevation gain and trails full of rocks big and small.  And the added challenge of minimally stocked aid stations.  I enjoyed the scenery and competition so much that I would label it Washington's Loveliest (and Rockiest) 50K.  Despite scorching temperatures 30 miles east in Yakima (100's) the green valley, elevation, and early start time kept the race temperatures down.  By noon it was getting hot, especially climbing up that last ascent. 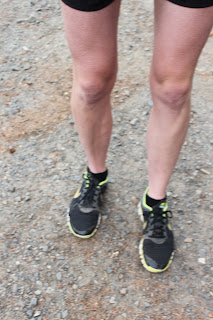 Wearing my Nike Free 3.0.  I have worn these shoes for every race and most training runs since the Seattle Marathon in November, let's see--- that's Seattle Marathon, Orcas 50K, Chuckanut 50K, Capitol Peak 50 mile, Rhody Run 12K,  Youngs Lake 50K, Sun Mountain 25K, and Grey Rock 50K.  It is about time for a new pair, sadly. 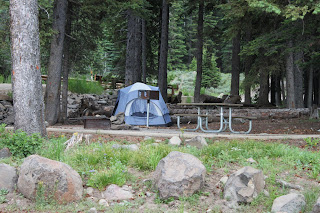 Here is my camping spot.  Lots of mosquitoes and right next to a lovely river where I soaked my tired legs post-race.
Race Report
The Start, Ascent and descent #1
We started the race on Grey Rock Trail at Tree Phones Campground.  the race begins by ascending the first of four climbs.  There were a lot of switchbacks which kept the pace at a nice clip, not too steep.  The trail is mostly shaded at this point and also because it is 7 AM start time, thank god. As we climb higher the trail breaks out into a meadow with an incredible view of Mt. Rainer.  I'm feeling good and ready for the downhill.  The descent boasts views of dried out tree stands, brushed by another year's fire.  Whole stands of trees are charred in places.  It has a unique beauty.  As we near Aid station #1 at mile 7.5 the trail gets steeper and more technical with a number of rocks.
The aid station (#1) was very minimal, shockingly so!  No gels, only bananas, Gatorade, water, watermelon.  I was *really* glad I opted to take my Nathan hydration pack with a little more room for energy gels and water.  Also glad I wasn't at the back of the pack.  I had a hard time deciding between carrying a running backpack or my hand bottles.  If you have the choice, pick backpack!  This station was where the 25Kers turned around.  Bye bye!
Ascent #2 to Aid Station #2 at mile 14.5ish
This section of the race was fun because all the runners were 50K participants.  I steadily jogged uphill.  It seemed like this was the longest ascent.  It included a lot of technical trail running, mostly over boulders and boulder strewn paths.  One section included a long stretch of rock jumping.  I passed a lot of runners who were taking their time getting over the rocks.  It was somewhere after the technical rock trail that I saw the first place runner, a tall man heading back on the trail.  He was flying!
A little later I arrived at the second aid station which was also poorly stocked. I did get a few mini potatoes and salt and some watermelon.  No bananas though =(  I would like to note that I refilled my pack at each aid station.  The temperature was steadily rising and the more water the better!  The trail went out one mile past the aid sation to a little rock tower marked with tape.  The one mile trail was a pretty big downhill with a lot of snow and water (puddles from melting snow and little streams).  I got wet feet on this section.
Halfway finished....
At the halfway mark I had a 1 mile ascent back to the aid station (no more potatoes unfortunately) then a mostly downhill descent to the first aid station.  This is the section that I had been looking forward to.  I love the descents.  I use them to pick up the pace and pass people.  I was trying to reel in the second place woman, who was 6-10 minutes ahead of me (didn't end up catching her).  I made up a lot of time and felt mosty good for my last ascent.
The Last Climb
This climb really hit me hard!  It was longer than I remembered and I was feeling a bit lightheaded as the temperature climbed and my fuel stores got low.  I was out of water by the top (3-4 more miles left) and I probably should have taken the water I was offered by the ATV guys, but I had my sights on finishing... This was the section that I really messed up my poor toes.  About 3 times I knocked my right foot on good sized boulders.  Once hard enough to almost make me cry.  Wow.  I have a bruised toe nail from that one.  Another time I tripped and almost, almost landed splat on a good downhill.  Leg to the rescue!  Happily it appeared underneath me before I touched ground.
The Finish
The fun of a out-and-back race is knowing when you are getting close to the finish!  Time to pick up the pace and finish strong.  The end of the race was a downhill descent (gotta love that) then a flat 100 meters or so to a small cheering crowd, thanks guys.  I was happily surprised with a medal for 1st place in age division.  I placed 3rd of women overall.  The post race food made up for the aid stations.  Lots of drinks to choose from including beer and soda.  Grilled steak, pasta salad, Caeser salad, fruit, vegetable platters, and strawberry shortcake. 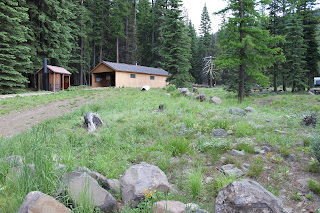 Lots of rocks even at the campgrounds 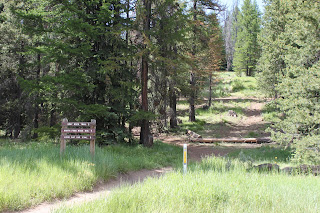 This is where the race started, Grey Rock Trail and went out 15.5 miles then back. 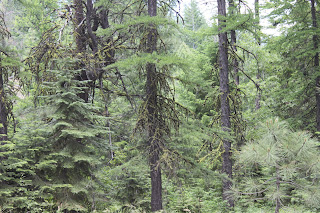 Some of the trees on the drive up to the race start and campgrounds. 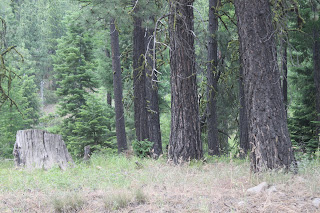