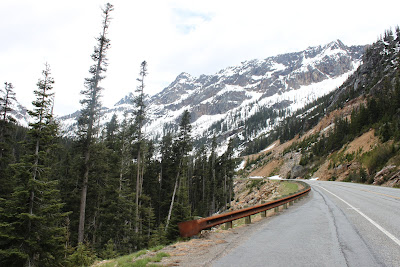 On the Road, Freedom!
Knowing I had a 4-something hour drive to Sun Mountain from Whidbey Island I borrowed my mom's zippy little gas efficient car. I mulled over my decision for days before going for it-- mostly because I would really, really miss having a CD player, especially on a 4-something hour drive. Nonetheless, the thought of 40 miles per gallon seduced me.

Ah... little did I know there were some fun tapes in the car that kept me busy fast-forwarding and re-winding throughout the drive. I won't soon forget that there was a horrible repeat of "Buttercup Baby" on one side of the tape. Two Buttercup Babies ad I didn't even like one... somehow the tape always seemed to stall on those two repeated songs and I would get lost in which way to rewind or to fast forward, get me away far away form Buttercup Baby!!! It was enough to drive me crazy. I rocked out to Tom Petty, Neil Diamond, ABBA, Stevie Nicks, and more, you get the genre right?. Somehow it was the perfect pairing with the zippy little car, the fast winding mountain roads, the rain and trees. 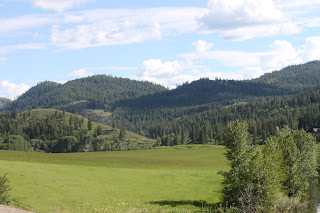 Winthrop, Methow Valley, WOW!
And yes, I am in love with Winthrop. It reminds me of Lake Tahoe and a bit like Mt. Baker: the alpine feel, the rolling green hills and wildflowers. Beautiful lakes... Wow, what a special place. It really is in the middle of nowhere though. There must be as many second homes in Winthrop and Mazama as there are single family homes. It seems to be the ideal "get away from the city" location, just far enough away with excellent winter sports and summer heat to draw tourists and sports enthusiasts.

Back to the race. 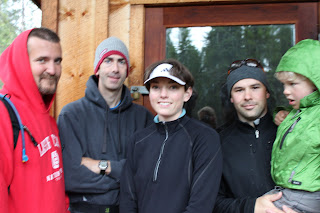 Me and my Whidby 25K  running partners, L to R: Nick, Jason, me, Seth adn his son Emmett.
I traveled to Winthrop to do the Sun Mountain 50K. James Varner of Rainshadow Running organizes many races each year, the Orcas Island 25K and 50K, Sun Mountain Trail Races, Cle Elum, and this year the Winthrop Road Marathon. And he does put on a great race. Sun Mountain Trail races offered a 1K kids race, a 25K, 50K, and 50 mile. I fully expected a fast, hot course, but got a very wet, cool, and slow course. The race may be a mile longer than advertised according to a friends GPS.

The night before the race I changed plans and opted for the 25K. It was a difficult decision as I really enjoy the 50K distance, but with a nagging hip injury, some other minor health issues, work the next day, and a 4-something hour drive home I decided on the 25K, 15.5 miles. I know, not very hard core. Only 15.5 miles. But how about 15.5 miles in the rain climbing a mountain, and running? 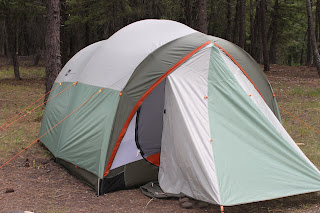 Amanda and Nick's awesome REI tent--- I want one! 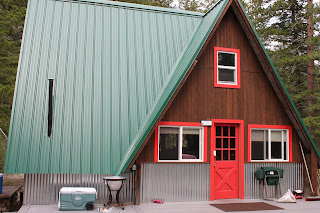 Kathy and Jason's Mazama cabin-- the best host and hostess' possible.
As I was driving the the race at 9 AM, it started raining. By the time the race began at 10Am there was no end in sight to the rain. It was coming down hard enough that I expected to be soaked in 10 minutes.

Happily after a half hour of running the rain abated and the sky cleared briefly to expose incredible views of foggy green mountains, meadows of wildflowers and even a wee little peek of sunshine here and there. The course slowly and steadily crept uphill with some nice flats and short downhills to Aid station at mile 8.5.

After the Aid station the trail turned into more of a dirt road that wound its way uphill, dropped rather briefly and then scrambled uphill for a stretch. Soon after this the trail was mostly down hill, with plenty of flat and rolling type hills. When I thought I had just 10 minutes left, 10 turned into 20! The course may be longer than advertised...

All said, I really recommend the Sun Mountain Trail Races. Plus, beer and pizza at the finish? Priceless.

Here are some pictures from Kathy nd Jason's cabin to the river a short walk away.  Such a pretty place... 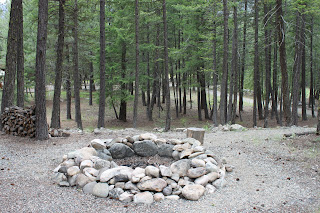 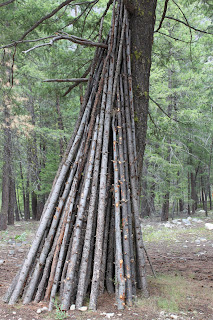 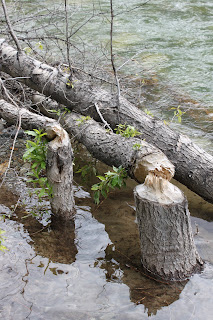 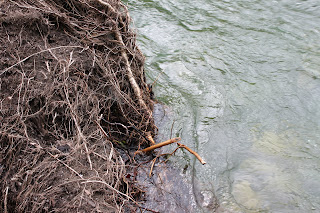 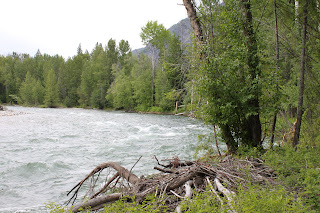